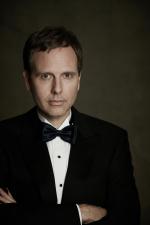 Where did the idea to write a new transcription of Chopin's concertos come from?


It is a project that has been formulating in my mind for many years since the interest in chamber version of the concertos started in 1990’s when I was first asked to perform such a version. Then of course with the publication of the most recent National Edition of Chopin’s works and with my interest in performing on period pianos it all seemed to crystallize my dream of preparing a version of these concertos a in a very authentic setting, which was really according to Chopin’s own taste. I think that one of the big complaints about the both piano concertos is the textural problem; that the orchestration seems to be rather heavy and uninteresting. And to my mind I think that Chopin probably heard the concertos quite pianistically and the concertos were conceived in a more intimate, chamber setting.

Did Chopin used to perform with that kind of an ensemble?


Yes, probably out of necessity – it wasn’t so easy to put together full orchestras and certainly it was not easy to check orchestrations with full orchestra until the day of a concert. When Chopin was preparing the concertos he often played them with quartets, quintets, limited ensembles, in small rooms. One of the really public performances of the concertos, in 1832, was at the Salon Pleyel in Paris, where he played apparently with quintet – I have the original program. This concert was for Chopin, to promote him, to help him financially, to get him started in Paris. There is Beethoven’s quintet in a program, some of the singing, and then you have first movement of – probably – E minor concerto. We can imagine that because there was a quintet on site that he probably played it in a quintet version. And of course we have more recent publications of concertos that Bartek Kominek arranged for quartet and piano, but I always felt there was something missing in not having the bass. The fact is we have evidence that Chopin actually did play it also with quintet, as well as with quartet, and I thought that this was something that would be very useful for me in many performances of these pieces and perhaps useful for other pianists and quintets, as well as small chamber string ensembles and orchestras.


Did you have the opportunity of presenting this version of concerts?


Yes, I had. Of course, it has not been published yet, but I have my scores and I’ve been using them, and I have to say that it is some sort of destiny that I do this. I remember how I felt at the Chopin Competition in 1990. No matter what anyone thinks of my performance during the final round, I was so dissatisfied with the sound of my piano in my conception and the sound of the orchestra. I hear the concertos is in that early romantic tradition of the style brillante, the lightness of the textures, in the tradition of Hummel, for instance – virtuoso pianist with the support of an orchestra, not competing with it in sort of “David and Goliath” relationship, without the heavy orchestra writing that you find in the later Romantic concertos. I don’t feel that that is the soundworld of Chopin. The setting of orchestration is not in his hand, it was written by the copyists and people who lived after him, who made a lot of changes saying that there was not enough bass, that it wasn’t rich enough in the texture or that middle register had to be thickened.


What is this edition based on?


My versions very much follow the direction of Jan Ekier and his wish to really find the most authentic form that we can find of these concertos, which is very difficult because of the lack of original source material. I do agree with him very much that the textures need to be thinned out. And of course the quintet version itself allows for the transparency of texture which is so suitable to the instrument, to playing these on the piano. It just gives me a lot of joy to play these versions.
I had tried to do an arrangement of this myself, by being extremely faithful to the scores I had at the time, and I made the big mistake of arranging it in a very literal way, to simply make sure that every wind instrument was transferred to a string instrument, but it doesn’t work. When you are writing a transcription from an orchestra version to a quintet version you have to have the knowledge of string instruments and what works for them. There must be some process of re-creating the sound so that it actually sounds natural to the sound of the string quintet. So I employed the help of a very good friend of mine, a cellist and composer Krzysztof Dombek. He has the knowledge of the string instruments and I have my ideas of how to try to get an authentic approach that I dream of finding, and we put together this new edition.