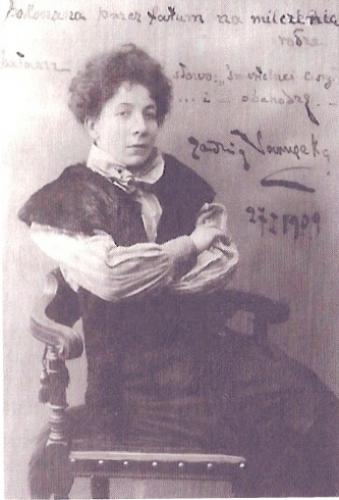 She was probably born in 1883 in Szarogród in Podole and died on 29 December 1913 in Kraków. Tuberculosis, which she had been fighting all her life, took in the prime of her life. She was buried in the Rakowicki cemetery, but her grave has not been preserved till the present day.

Very little is known about her life. She was well-educated in music; her teachers included Aleksander Michałowski and Teodor Leszetycki. Although she was famous as an excellent pianist, first and foremost she wanted to be (and was) a composer. She took lessons from Władysław Żeleński and Felicjan Szopski and perhaps Henryk Melcer – irregularly, privately. Her compositions could not have been liked. Being different, they received scathing reviews and were described as bizarre, depressing and half-amateurish, chaotic both in their form and content. But Sarnecka kept writing. She printed her compositions at her own expense. Finally, fortune started to smile at her and her talent was noticed: Feliks „Manggha” Jasieński funded publication of her compositions from his own money. The people who exerted the greatest influence over the shape of the Polish music of that time - Chybiński, Reiss and Jachimecki, started to write about her work in a favourable, almost euphoric tone. At last, a prize came. II prize for the IV Ballad at the composition contest organized in Lviv to celebrate the centenary of Chopin’s birthday (the I prize went to Karol Szymanowski). What an event! What’s more, during the I Meeting of Polish Musicians she was the only woman asked to give a paper. She chose to talk about “Creativity vs virtuosity in musical composition”.

Unfortunately, the illness had been developing unrelentingly. Bitter criticism continued and Jadwiga supposedly fell into depression. We do not know the exact reason that she stopped publishing her compositions, although she kept writing. Moreover, during that period she wrote her most avant-garde compositions, she radicalized her harmonic and stylistic language. She came close to experimenting with polytonality and followed her own, individual path. Her handwriting became shaky, then it died, disappeared from view. She did not finish her VII Ballad, Sonata, Variations…Later the war began, the world changed. Everyone forgot about her.

7 ballads, 2 sonatas, a fantasia, 13 impressions, two variation cycles, an intermezzo, 2 studies, an etude, a printed cycle of miniatures. Additionally, she also wrote three songs for solo voice and piano. Such are the creative achievements of a person who went through the history of music as quickly as a flash. Few had time to spot her during her short life.