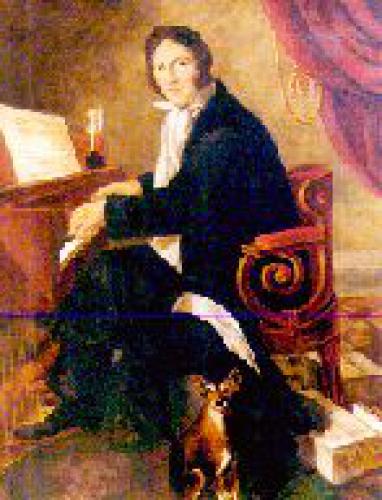 Karol Kurpiński was born in 1785 in Włoszakowice. Karol Kazimierz, who in the future would become one of the leading Polish composers of the first half of the nineteenth century, was the fifth of six children of Marcin Kurpiński and Franciszka née Wańska originating from a well known Wielkopolska family of musicians – Jan and Roch Wański. At the age of twelve Karol Kurpiński went to Sarnowa, a village near Rawicz, whose pastor was his mother's brother, Fr. Karol Wański, taking the role of organist in the local church.

At the beginning of 1800, the 15-year-old Karol left the family home forever and went to Moszków near Lviv. There, under the care of his uncle Roch Wański, he developed his musical talent as a second violinist in the orchestra in Feliks Polanowski’s palace. Unfortunately, Kurpiński’s benevolent patron Feliks Polanowski died on 1808, then his uncle Roch Wański and the liquidation of the palace orchestra, forced the 23-year-old musician to leave Moszków in February 1810. Karol Kurpiński settled in Warsaw, where Józef Elsner, composer and from 1799 director of the orchestra of the National Theatre (and future teacher of Chopin), hired Karol Kurpiński for the position of second conductor of the theatre orchestra from the new theatrical season, i.e. from 1 July 1810.

Kurpiński’s most successful period, both personal and professional, can be said to be the years 1815-1823. At the beginning of January 1815, he was admitted as a member of the Society of Friends of the Sciences in Warsaw. In the same year he married a young actress of the National Theatre, a student of W. Bogusławski, Zofia Brzowska. Karol Kurpiński as a composer, conductor, theorist, writer and organizer of various forms of musical life, a promoter of Polish national art fulfilled a special role in the development of Polish musical culture. Thanks to his varied and excellent activities, he is regarded as one of the most eminent Polish musicians.
Copyright © 2013 PWM