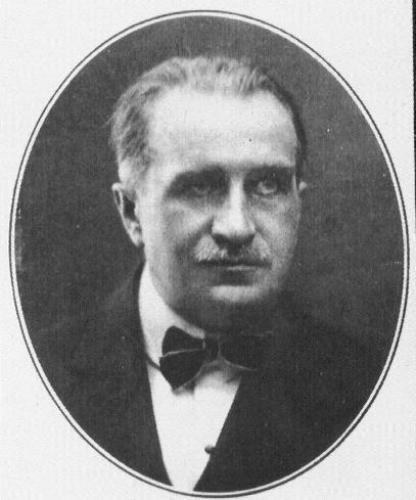 Opieński Henryk, born on 13 January 1870 in Kraków, died on 21 January 1942 in Morges (Switzerland), Polish composer, conductor and musicologist. He studied violin under W. Singer in Kraków (1884-88) and F. Lachner in Prague (1888-92), composition under W. Żeleński at the Kraków conservatory (1892-94), violin under W. Górski as well as theory and composition under Z. Stojowski in Paris (1894-97), composition under H. Urban in Berlin (1897-99, studies funded by I.J. Paderewski), under V. d’Indy at Schola Cantorum in Paris (1899–1901), conducting under A. Nikisch and musicology under H. Riemann in Leipzig (1904-06). In 1914 he defended his doctoral thesis entitled Beiträge zur V. Bekwarks Leben und Werken (not published) at Leipzig University. In the years 1888–92 he studied chemistry at the University of Technology in Prague, later he worked as an inspector in the alcohol distilleries in Żólkiew and Rzeszów. At school age, in Kraków, he became friends with S. Wyspiański, L. Rydel, J. Mehoffer and others. In 1894 in Paris he met I.J. Paderewski, who became his lifelong friend. In 1900 he married A. Krzymuska (who died in 1923) and in 1925 L. Barblan, a singer and composer from the group “Motet et Madrigal”. Opieński was active within various fields, but he was most devoted to musical performance: he played in E. Colonne’s orchestra in Paris (1899–1901), he was a violinist, the orchestra inspector and the chorister of the Warsaw Philharmonic (1901–04), in 1905 he was a conductor one of the Warsaw orchestras, in 1908-11 worked with the orchestra of the Grand Theatre, in 1912-14 with the orchestra of the Polish Theatre in Warsaw. At the same time he went into teaching, published numerous articles and composed. Since 1909 he taught at the music school of the Warsaw Music Society and since 1912 at the Warsaw Institute of Music, in 1911 he started, and edited until 1914, ”Kwartalnik Muzyczny”. He spent the years 1914-19 in Switzerland, in 1917 in Lausanne he created a mixed chorus “Motet et Madrigal” which for many years accompanied him during his concerts of early music given all over Europe. After his return to the country he started and managed a music conservatory in Poznań (1920-27), in 1923 he was the president of the “Wielkopolski Związek Kół Śpiewaczych” (“Wielkopolska Union of Choral Circles”)and the director of the Grand Theatre, in November 1925 he was appointed vice-president of “Zjednoczenie Polskich Związków Śpiewa¬czych” (“Polish Union of Choral Circles”). In the same year, thanks to his inspiration, “Przegląd Muzyczny” started to be published in Poznań. It was the official magazine of the Polish Union of Choral Circles, run by it until 1927. In 1926 he settled in Morges near Lausanne. In Switzerland he continued his musical activity; in 1932-36 he was the manager of the Société Vaudoise de Musique (the musical society of the Vaud district). He stayed in touch with his country which he often visited.