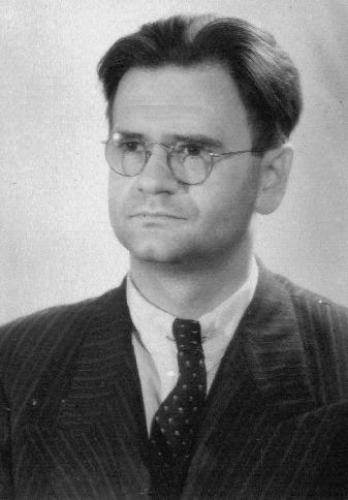 Tomasz Kiesewetter, born 8 September 1911 in Sosnowiec, died 29 November 1992 in Łódź, Polish composer. He completed his studies at the Conservatory in Warsaw in 1936 (Diplomas: composition in P. Rytel’s class, conducting with W. Bierdiajew). In the years 1936-1938 he was assistant to W. Bierdiajew (conducting, orchestra and choir). During this time he conducted symphonic concerts in Warsaw, Kraków, Vilnius, Berlin, Sztokholm. In 1938 he was in Salzburg for the conducting course at the „Mozarteum”, in the years 1938-1939 he led the S. Moniuszko Choir, ensembles from Polish Radio in Łódź where he lectured at the H. Kijeńska-Dobkiewiczowa Conservatory. From 1945 he lectured (from 1959 as Professor) at the PWSM (now the Music Academy) w Łódź. In the years 1945-1970 he conducted the Symphony Orchestra of the Łódź Philharmonic, the folk music ensemble of the Music Institute and the orchestra of the PWSM in Łódź. He twice (1967, 1974) received the Minister of Culture and Arts Award, first degree, he received the Order of the Banner of Labour first class (1985) and musical prizes including in 1955 for his suite „Tańce polskie” at the II Polish Music Festival, in 1968 for „7 strof o słowikach” at the choral competition in Łódź, in 1975 for the music to W. Gombrowicz’s „Operetka” at the XVI Festival of Contemporary Polish Art in Wrocław.
Copyright © 2013 PWM