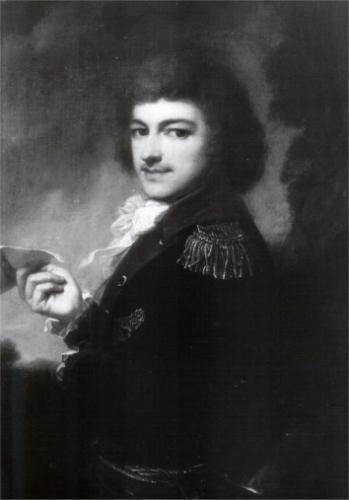 Born in 1765 in Guzów (near Warsaw), composer and political activist. His first lessons in learning to play the violin and the clavichord were taken in Guzów with J. Kozłowski, who also taught him theory and figured bass. His next violin teachers were: I.M. Jarnovic in Warsaw and G. B. Viotti in Italy. He frequently performed, playing a chamber repertoire (he played, among others with the Viennese pianist and composer J. Wöfle). In the years 1789 - 1802 he devoted himself to political activities. He was a Polish envoy in The Hague, London and Amsterdam (1790 - 91), and a member of the Four Year Sejm (1788 - 92). He joined the Targowica confederation (1792), and with a group of politicians signed the treaty of partition with Russia and Prussia. After the defeat of the Kościuszko Uprising (1794), in which he participated, he went to Venice and his property was confiscated. At the end of 1801 was allowed to return to Russia. After 1812 he became involved with the cultural environment and intelligentsia of Vilnius, organising concerts and performances. In 1823 he moved to Florence, where he remained until his death in 1833. M. K. Ogiński’s compositional achievements are mainly polonaises. In addition he wrote waltzes and mazurkas for piano, marches, uprising and revolutionary songs and created the opera "Zélis et Valcour ou Bonaparte au Caïre". He is also the author of memoirs (vol. 1 - 4 from 1826 to 1827) and "Letters About Music" (1828).

As a creator of polonaises, Ogiński often used themes taken from contemporary operas and popular French romances. He was the first composer in the history of Polish music to create a stylized type of dance, later masterfully developed by Chopin. As author of the forementioned Waltzes and Mazurkas, he is considered one of the main pre-Chopin representatives of the piano miniature.

Michał Kleofas Ogiński is known primarily as a creator of polonaises. These works, showing his talent, are characterized by elegance and melancholic atmosphere, typical of sentimentalism.
Copyright © 2013 PWM