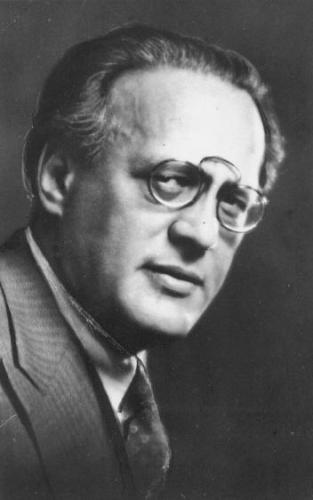 Grzegorz Fitelberg, born on 18 November 1879 in Dźwińsk (now Dyneburg), according to the preserved biography and death certificate - in 1874 in Warsaw, died on 10 June 1953 in Katowice, Polish conductor, composer and violinist, the son of Hozjasz Fitelberg, an army musician. In 1891-1896 he studied violin under S. Barcewicz and composition under Z. Noskowski at the Warsaw Institute of Music. In 1896 he became a violinist in the orchestra of the Grand Theatre and from 1901 he was also leader of the second violins of the Warsaw Philharmonic Orchestra. At that time his composing talent was noticed - his “Sonata in A minor” for violin and piano won the first prize at the I. Paderewski Competition in Leipzig in 1898, and he was also awarded the first prize for “Trio in F minor” for violin, cello and piano at the Count M. Zamoyski competition in Warsaw in 1901. In the season 1904-1905 he made his debut as a conductor at the Warsaw Philharmonic. Fitelberg’s artistic career was shaped by his acquaintance (1901) and later friendship and cooperation with Karol Szymanowski. In 1905 they organized and managed the Publishing Group of Young Polish Composers. In 1906 he conducted the first concerts of the Young Poland group. Alongside the compositions of Szymanowski, Karłowicz, Różycki and Szeluta he presented his own symphonic poem “The Song of the Falcon” in Warsaw (on 6 February) and Berlin (on 30 March). In 1906-1907 he gave several concerts at the Berlin Philharmonic, conducting symphonic poems by R. Strauss. In the following season he conducted the premiere of R. Strauss’ “Salome” at the Grand Theatre in Warsaw. In 1908-1911 he headed the Warsaw Philharmonic and gave guest concerts in Berlin, Leipzig, Dresden and Vienna. In the summer of 1910 he led the orchestra in Majorenhof near Riga, where he rehearsed the first movement of Szymanowski’s “Symphony No.2” (on 13 September), at that time not yet completed. He presented the finished composition, dedicated to him, on 7 April 1911 at the Warsaw Philharmonic. In the period 1912-1913 he conducted the Vienna Opera (the Hofoper) and gave concerts with the Vienna Konzertverein Orchestra; two of them took place in Kraków (on 25 and 26 April 1912). In 1913 he returned to Warsaw and shortly after went to Russia, invited by S. Koussevitzky. In 1914-1919 he worked in Petrograd: he conducted a concert of Polish music on 19 November 1914 (Moniuszko, Fitelberg, Karłowicz, Szymanowski), later he conducted the orchestra of the Muzykalnaja Drama theatre, the Mariinsky Theatre and the Mikhailovsky Theatre. From 1917 he was the conductor of the State Philharmonic and after Koussevitzky’s departure in 1920 he became its head. In 1920-1921 he was the conductor at the The Bolshoi Theatre in Moscow. In 1921, after paying a short visit to Poland, he assumed the position of the conductor of the Ballets Russes founded by S.Diaghilev. He worked with that group until 1924, sharing conducting responsibilities with E. Ansermet and E. Goossens, giving concerts in Paris, London, Monte Carlo and Brussels. On 3 June 1922 he conducted the premiere of Stravinsky’s “Mavra” at the Paris Opera. In 1926-33 he presented the operas: “Golden Cockerel” by Rimsky-Korsakov, “Beatrix Cenci” by Różycki, ”Demon” by Rubinstein, ”Faust” by Gounod, ”Carmen” by Bizet, ”Eugene Onegin” by Tchaikovsky and Puccini’s “La Boheme”. In 1925 he gave a series of concerts in the Teatro Colón in Buenos Aires, in 1929 he staged operas by Borodin, Mussorgsky and Rimsky-Korsakov at the Opéra Privé de Paris with whom he toured throughout the countries of Latin America. In the period 1934-1939 he organised and lead the Warsaw Radio Symphony Orchestra. Apart from the radio concerts given with the orchestra at a regular basis, he also gave public concerts in Warsaw and Kraków (concerts at the Wawel Royal Castle in 1936-1939) and during the Paris World Exposition in 1937, where the orchestra was awarded a gold medal. In November 1939 Fitelberg left Warsaw and in dramatic circumstances went to Paris through Vienna and Milan. There, as well as in Bristol (for the BBC), London and the Hague, he in 1940 several concerts for the benefit of Polish war victims in 1940. In November 1940, he left for South America, in 1940-1941 he was the conductor at the Teatro Colón in Buenos Aires. He spent the period 1942-1945 in the USA, becoming involved in various tasks such as conducting and instrumentation and being forced to accept artistic compromises. He gave “good concerts”, as he described them in his letter to S. Spiess from 6 November 1945, only in Montreal, Toronto and New York with W. Małcużyński and B. Huberman (Bach, Beethoven, Szymanowski). After moving back to Europe in 1946 he started to give many concerts, especially in Great Britain, the Netherlands and Scandinavia. In October 1946 in Kraków he gave his first concert after coming back to the country (“Episode at a Masquerade” by Karłowicz, “Violin Concerto” by Palester and “Harnasie”(“The Highland Robbers”) by Szymanowski). In 1947 he became the director of WOSPR in Katowice. With that orchestra he gave concerts in Warsaw, Wrocław, Kraków, Czechoslovakia (1948), Romania and Hungary (1950). During his last years he worked with his later successor, J. Krenz. Fitelberg also taught: in 1927-30 led the classes in conducting and orchestra at the Warsaw Conservatory, in the academic year 1950/51 he was a professor at the PWSM in Katowice. Among his students were M. Mierzejski, M. Neuteich, O. Straszyński and K. Stryja. Fitelberg was awarded many distinctions: the Officer's Cross of the Order of Polonia Restituta (1928), the Gold Cross of Merit (1932), the Commander's Cross of the Order of Polonia Restituta (1947), the Order of the Banner of Labor first class (1950), the Knight’s Cross of the National Legion of Honour, the Commander’s Cross of the Order of the Crown of Italy and many other Greek, Yugoslav and Romanian distinctions. In 1951 he was granted the State Award, first class. The Radio Music House in Katowice and two competitions: the National Composing Competition and the International Competition for Conductors (since 1980) were named after him.
Copyright © 2013 PWM