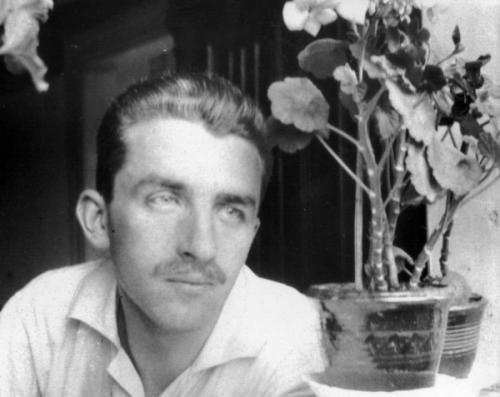 Born 23 January 1888 Kraków into a musical family. In childhood he started learning the piano and flute. After finishing high school he wanted to continue his musical studies abroad, but his mother would not agree to her son leaving home at such a young age. He was accepted at the Faculty of Law at the Jagiellonian University in Kraków.

Parallel to his legal studies, he deepened his knowledge of composition, theory and music history under the direction of Feliks Nowowiejski, Władysław Żeleński and Zbigniew Jachimecki. He also learned to play the organ. His father owned a small industrial company, and in time began to acquaint his son with the way to run a business. Although his father burdened him with factory affairs, Jerzy found time to play the flute in symphonic orchestras and chamber ensembles, to play the organ in the cathedral and to compose.

After the outbreak of World War I, his parents and sister went to Vienna, leaving Jerzy in charge of the company, but despite much activity, he did not stop composing. After the war he was asked to play the score of the "Haunted Manor" by Moniuszko. A version based on the piano score was prepared and presented July 2, 1919, in the Słowacki Theatre in Kraków and was received with great critical acclaim. Undoubtedly, the success of this presentation encouraged him to compose his own opera in 1920 – a musical fairy tale "Zaczarowane koło" to a libretto according to the drama by L. Rydel, which premiered in 1955 in Bytom. This piece came at the beginning of an intensive period of composing. In the following years he wrote, amongst other pieces, the symphonic poem “The Pilgrim”, “In the Mountains”, “Legend of Turbacz” suite, “Five Miniatures for my children”, Symphony I and the Piano Concerto in D flat major.

From 1928 there was a long period of creative silence. From existing correspondence it is known that during this period the factory expanded. Only after eight years, in the first half of 1936, he wrote the "Symphonic Variations" and in June 1937, the composer completed the symphonic prelude "The Enchanted Lake" – his last completely orchestrated work. He died tragically on 11 November 1937 in a passanger airline crash near Piaseczno, by Warsaw. He was buried in Kraków, in a family tomb in the cemetery of the Holy Saviour. He neither lived to see the performance of his opera, nor wider recognition by the Polish musical environment.
Copyright © 2013 PWM