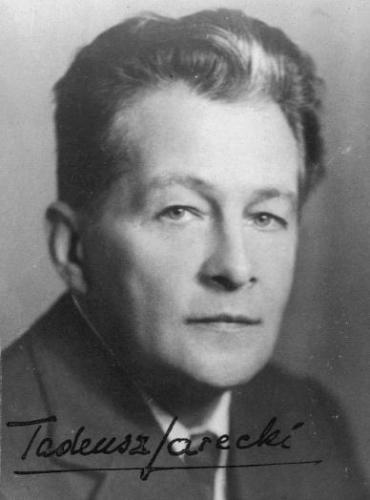 Tadeusz Jarecki, born on 1 January 1889 in Lviv, died on 2 May 1955 in New York City, composer, conductor, writer, son of Henryk Jarecki. He studied at the Lviv Technical University and also studied music under his father and with S. Niewiadomski at the Galician Music Society Conservatory in Lviv, complementing this in Moscow with S. Taneyev and in 1909 or 1912-1913 with E. Jacques-Dalcroze, who was a lecturer for some time in the institute. In 1917 he was in the United States, in 1918 he returned to the country and entered the Polish Army as a volunteer and an officer. In 1920 he returned to the United States, where in 1921 he married the singer Louise Llewellyn. Tadeusz Jarecki conducted the NBC Symphony Orchestra in New York, then he was the director of The Chamber Ensemble (Jarecki’s wife as vocal with the Pulgar piano trio) of the local radio station. From 1932-1936 he was in Poland and was appointed director of the S. Moniuszko Music Society and Conservatory in Stanisławow, he conducted the symphony orchestra in Lviv, and in 1935 he staged his father's opera "Mindowe". In the years 1936-1938 he stayed in the United States, in 1938 he went to Paris. During his stay abroad, Tadeusz Jarecki associated himself with Polish artistic circles. In 1929 he was elected secretary general of the Society to promote cultural relations with Russia (Committee to Foster Friendly Relations Between the Arts of Poland and America). During World War II, he held various positions in the Polish government in exile in London. In 1940 he was head of the department of the Ministry of Information, in 1940-1943 he organized and led the Polish Musicians of London Association. In 1946 he finally moved to the United States, where he worked at Columbia University in New York, among others places. In the inter-war period he had permanent collaboration with “Muzyka” magazine, sending correspondence from places including New York, printed in "From the opera and concert halls" section. In the years 1936-1945 he published articles in the English magazine "The Chesterian".
Copyright © 2013 PWM