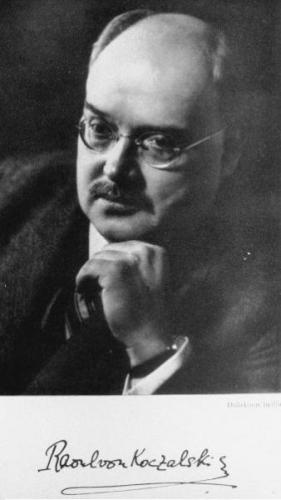 Raoul Koczalski, Raul, von, pseudonym Georg Armand, born 3 January 1884 in Warsaw, died 24 November 1948 in Poznań, Polish pianist and composer. His first music teachers were his parents. In 1888, at the age of 4, he gave his first concerts in Warsaw (15 March) and Riga (31 October), starting his career as a “child prodigy” (he played mazurkas and waltzes by Chopin, among other pieces). At the age of 7 he received the prize of the Paris Conservatory (Premier Prix d’Enfant), and also the title of court pianist to the King of Spain, the Shah of Persia and the Sultan of Turkey. He performed all over Europe, his repertoire included pieces by Bach, Beethoven („Waldstein Sonata”), Liszt, Anton Rubinstein and Paderewski; in 1896 he celebrated his 1000th concert in Leipzig. He took lessons from Anton Rubinstein in St. Petersburg, and he continued his music instruction in Warsaw with J. Gadomski (piano), in Lviv with H. Jarecki (instrumentation), L. Marek (piano) and in the years 1902-1905 with K. Mikuli (piano and composition). He also studied musicology and philosophy at the university in Paris. As a result of his busy concert career, he spent most of his time abroad; he lived mainly in Germany (Wiesbaden, Leipzig and Berlin). During WWII, he was repressed by the German government. He was forbidden to perform publicly or to leave Berlin; despite this he organised concerts at home for his friends and students. He returned to Poland in 1945 and became Professor of the piano class at the PWSM in Poznań and Warsaw, and continued his concert career. He had planned numerous performances for the 100th anniversary of F. Chopin’s death in 1949. Koczalski’s performances of Chopin’s works are published in recordings by Columbia, HMV, Muza, Odeon, Polydor, Pearl CD („Raoul Koczalski Plays Chopin”). In recognition of his work in developing Polish culture he was awarded the Officer’s Cross of the Order of Polonia Restituta.
Copyright © 2013 PWM