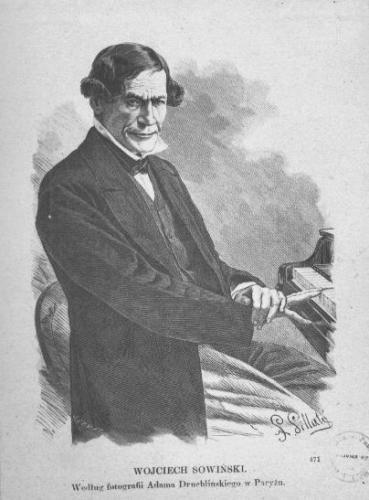 Sowiński Wojciech Albert, born in 1803 or 1805 in Łukaszówka (Hajsyński district in the region of Podolia), died on 5 March 1880 in Paris, Polish pianist, composer, musicographist. He learnt the basics of music from his father, Sebastian Sowiński who was Kapellmeister of the army orchestra and later the Potoccy orchestra in Tulczyn. His career started in Vienna in 1825-27 where he gave one concert (sponsored with his own money) and may have taken lessons from K. Czerny (piano) as well as I. Seyfried and A. Gyrowetz (composing). After a brief stay in Italy he settled in Paris in 1828 (until 1850 he lived in the marquess E.-J.-F.-Ch. d’Aligre’s residence in Faubourg de Saint Germain). Supported both by the Polish emigration (L. Chodźka) and the music society – the review writers and J.-F. Fétis, the editor-in-chief of the ”Revue musicale”, Sowiński soon became popular and got engaged in a variety of undertakings. He was most of all a pianist and a pedagogue. He gave concerts in France, England, Scotland and Ireland (1835, 1836, 1842), Germany (1841, 1842, 1847) and Belgium (1842, 1854). Several times he performed alongside Liszt (e.g. on 19 April 1835). The ”Revue musicale” (with which he had been unofficially collaborating since 1828) and ”Revue et Gazette musicale de Paris” until about 1860 printed glowing reviews and even eulogies in his honour, some of which were dictated or edited by Sowiński himself, as has been proven by E. Talma-Davous. His participation in Chopin’s debut in Paris (on 26 February 1832) was a historical event; together with Mendelssohn, C.M. Stamaty and G. Osborne he accompanied Chopin and Kalkbrenner (“Marche suivi d’une polonaise” for 2+4 pianos by Kalkbrenner). He presented his compositions during concerts, at first compositions for piano, duos for piano and violin, in the second half of the 1830’s and in 1840’s he premiered great compositions for many instruments, during his last concert (on 22 March 1879) the premiere of his “Piano Concerto No.2” took place. In the period 1845–47 the first part of the Oratorio about St. Adalbert of Prague was the most often performed of Sowiński’s compositions. Each season, until 1879, he gave a yearly concert in Paris (usually in the Herz Chamber). He gave piano lessons in Polish and French houses, in 1830 at the François-David Stoepel’s music school, since 1842 he was a pedagogue at the girls’ school at the Couvent des Oiseaux in Paris. Being a music writer, Sowiński worked with Fetis and L. Chodźka, translated German literature into French and became one of the pioneers of Polish music lexicography. He was well-known in the society of Polish emigrants in Paris and attended anniversary celebrations, in the 1860’s he sought contact with the Poles living in the country, met O. Kolberg and J. Sikorski in Paris, and may have got to know Moniuszko. In the 1840’s the French press (”L’Artiste” 1843) mentioned his participation in the November Uprising and his family connections with the war hero, Gen. J.L. Sowiński. He did not deny the rumor and even wrote a diary describing the uprising, which he gave to S. Duchińska-Pruszakowa (“Kłosy” 1880 No. 774). The current whereabouts of the diary are not known. Since 1829 Sowiński was a correspondent member of the Societé Acad. des Enfants d’Apollon, since 1859 a member of the Imperial Academy of Arts and Sciences of Vienna, in 1865 he became a member of the Accademia di Santa Cecilia in Rome. He died alone in Paris and was buried in the Montmorency cemetery. He deposited his compositions in the Bibliothèque Royale (now Nationale) in Paris. He left about 120 compositions with opus numbers. The most comprehensive catalogue of Sowiński’s works can be found in his “Słownik muzyków polskich dawnych i nowoczesnych”, most of them were published in France (M. Schlesinger, later Brandus, Launer, Girod, Challiot et al.), some of them in Gremany (Schott and Bote & Bock), a few are kept in Polish libraries - the archive of the National Library holds 6 autographs, including the St. Adalbert of Prague Oratorio and two masses.
Copyright © 2013 PWM