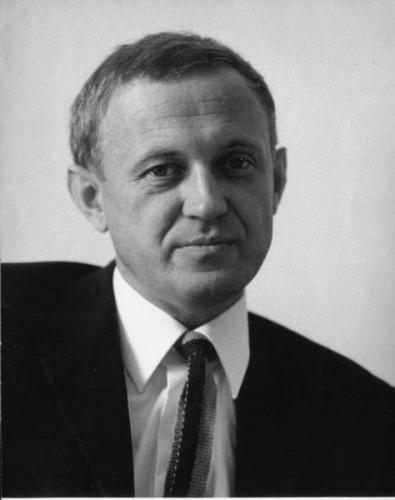 Augustyn Hipolit Bloch born 13 August 1929 in Grudziądz, died 6 April 2006 in Warsaw, Polish composer and organist. In 1954 he graduated from the PWSM in Warsaw where he studied organ with F. Rączkowski, and in 1956 composition with T. Szeligowski. In the years 1947-1957 he performed as an organist in Wrocław, Oliwa, Warsaw. He recorded organ recitals for radio. In 1960 he received the Polish Radio Award for his music for children. He is a winner of international composition competitions: in Vercelli in 1953 for "Piano Variations", in Monaco in 1961 for „Medytacje” and in 1963 for the ballet „Oczekiwanie”. In 1969 he was awarded third place at the UNESCO International Rostrum of Composers in Paris for his “Dialoghi”. In 1971 he received the Ministry of Culture and Arts Award, in 1975 the Prime Minister's Award for artistic creation for children and youth. Many of Bloch’s compositions have been performed at the Warsaw Autumn Festival.

In the years 1954-1977 Bloch had permanent cooperation with Polish Radio Theatre as a composer of music for radio plays. In the years 1977-1979 he was Vice-President of the Board. In his first works, Bloch remained under the influence of the classical style ("Variations", "Sonata", "Concertino") and he also used his experience of organ performance practice. A further element in the development of his compositional technique were vocal-instrumental pieces („Impressioni poetiche”, „Espressioni” and „Medytacje”), showing his ability to work with vocal resources. The selection of texts dominated by humanist, universally human, content points to the ideological stance of the composer.

Bloch’s main direction of work crystallized in the 1960s - stage music. In this, the composer reveals his exceptional musicality and ability to create music with a simple dramaturgy, while simultaneously enriching the technical resources. And so, for example, already in his first ballet, called "Voci", Bloch uses dodecaphonic techniques. In later works, the basic formal foundation of the structure becomes a series (one or more in a piece) and its various transformations (e.g. „Dialoghi”’, „Gilgamesz”). He presents an original construction in "Enfiando" for orchestra, a work based on the dynamic effect enfiando (swelling). Bloch sometimes placed modern and experimental techniques and formal experimentation in the atmosphere of archaic music, synagogue and Gregorian chants („Medytacje”, „Ajelet”). This is linked to the problem so important for contemporary composers - treatment of timbre, and thereby performance forces. It is very uniform with Bloch; in most of the pieces he uses sets of percussion instruments, pitched and unpitched. Drums, being one of Bloch’s principal means of artistic expression, don’t just realise complex rhythmic and metric systems, but also gain a special colourist meaning. A similar role is also often undertaken by the voice, which frequently coexists with percussion.
Copyright © 2013 PWM