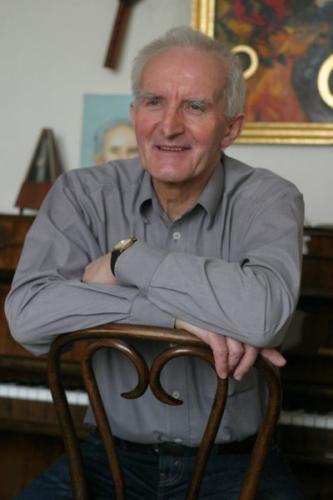 Born on January 3, 1937 in Krakow. Here he received his musical training, here he lives and works. In the late ‘fifties he debuted in the cabaret "Piwnica pod Baranami" and remains associated with it to this day. He composed many songs for ‘Piwnica’ artists, especially for Ewa Demarczyk. He is also a composer of theatre music, working with many theatres, for whom he has written a range of compositions, in particular for plays by Stanisław Wyspiański: including "Wyzwolenia" and "Nocy Listopadowej" in the Stary Theatre in Krakow. He is also well-known as a composer of film music. He wrote music for many films such as "Dolina Issy", "Jańcio Wodnik", "Historia kina w Popielawach" and "Prymas".

In 2012, in recognition of his services in the field of culture, Zygmunt Konieczny was awarded the Commander's Cross of the Order of Polonia Restituta

His compositions have been repeatedly honoured. He has won awards at the festivals in Opole and Sopot, the City of Krakow Prize, the Golden Lions in Gdańsk, the Polish Film Award for his score to the film Jan Jakub Kolski, and many others. From Zygmunt Konieczny’s abundant and diverse work, including music, theatre, film and literary song (or if you prefer, poetic), that which is closest to the composer’s nature seems to be the latter. In the post-war history of Polish cabaret songs, Zygmunt Konieczny was one of the first composers who tried to break through existing conventions in the literary song and thus give it artistic character.

The composer tries to capture all the nuances of the text as perfectly as possible through music: and therefore the music in his works is a kind of interpretation of the literary text. His music has a distinctive, easily recognizable style, whose originality lies in the method of selection and synthesis of different musical elements, whose ultimate quality of expression is gained by the performer, or in the context of the entire theatrical or film form.
Copyright © 2013 PWM