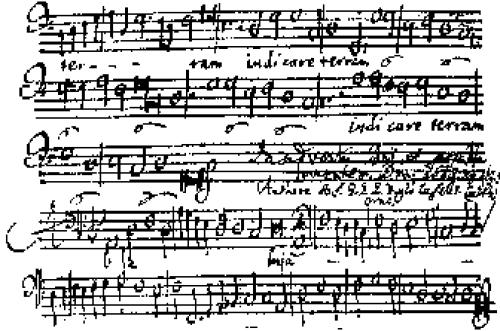 Grzegorz Gerwazy Gorczycki was born at Rozbark near Bytom c. 1665. Between 1678-83 he studied philosophy in Prague and from 1689 - theology in Vienna. In 1690 he came to Cracow, where in 1692 he took holy orders. Between 1692-94 he lectured on rhetoric and poetics in the Chełmno Academy and directed a church chapel at Chełmno. From 1694 he was exclusively connected with Cracow. In 1698 he was appointed a kapellmeister of the Cathedral chapel (he conducted, prepared the repertory, composed, prepared the parts for the ensemble). During the coronation of Augustus III and his consort he conducted the Cathedral chapel: it was his last important performance. He died in Cracow in 1734.
Gorczycki wrote mainly church music: unaccompanied compositions for choir, sometimes with b.c. accompaniment in the antico style (motets, masses, songs), as well as vocal-instrumental ones with b.c. accompaniment in the stile moderno featuring rich concertato technique multi-sectional and verse religious concertos as well as ensemble cantatas.
Gorczycki is regarded as an outstanding Polish composer of high baroque. He used the most advanced achievements of the compositional technique of those times.