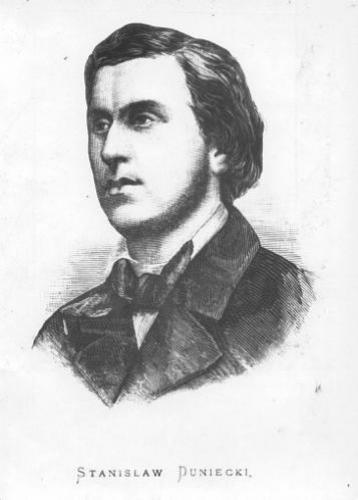 Stanisław Duniecki,, born November 25, 1839 in Lviv, died December 16, 1870 in Venice, Polish composer. Initially, he studied piano and composition with J.K. Kessler. From 1854-1858 he studied in Leipzig, in 1859 he supplemented that in Vienna, then in Brussels with F.J. Fétis and in Paris. In 1863 he returned to Poland, then took a job as Kapellmeister of the theatre in Lviv, where in 1864 staged his most famous operetta „Paziowie królowej Marysieńki”, which was also played in 1865 in Vienna and Kraków. It was performed with Helena Modrzejewska in the role of one of Stefan’s servants, it enjoyed great success in Kraków. Then Duniecki was in Warsaw and wrote articles about opera in the weekly „Kłosy”. As the opera in Warsaw did not stage his "Paziów", he took the position of Kapellmeister of the theatre in Kraków in 1866. During his stay in Kraków he organized opera performances - he staged "Halka" (November 29, 1866) with M. Gruszczyńska (the performance on 29 December was attended by the composer) and "Verbum Nobile" (18 January 1867) by Moniuszko, as well as his own opera and operetta - but despite these efforts, the Kraków Opera did not survive. Duniecki also wrote articles in Kraków's weekly "Kalina". As a result of lung disease in 1867 he went abroad. He stayed in Romania, Merana, the Tyrol, and finally settled in Venice. Referring to the technical resources used by Rossini and Offenbach, Duniecki primarily wrote comic opera, operetta, vaudeville, from which his contemporaries particularly valued such songs as „Paziowie królowej Marysieńki” and „Pokusa”. It is believed that in his unfinished opera "Igor" he wanted to refer to the achievements of Wagner, as he enthusiastically referred to his works, controversial at that time.
Copyright © 2013 PWM