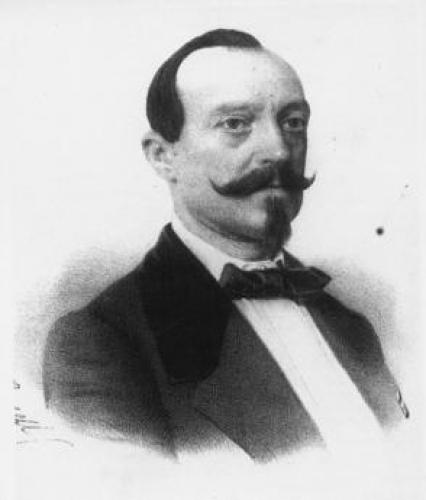 Antoni Kątski, born on 27 October 1817 in Kraków, died 7 December, 1899 in Iwanicz near Novgorod, a pianist, composer, son of Grzegorz. He first learned the piano with his father, at the end of the ‘20s he was probably a student of the Main Music School in Warsaw. In the years 1829-1830 he studied with J. Field in Moscow and then with S. Sechter (composition) and S. Thalberg (piano). His first public appearance (together with his brother Karol) took place in Kraków at the age of 4 years (3 February 1822). From then he performed regularly as a "child prodigy" in Warsaw and other Polish cities, as well as in Vienna, in Hungary and Russia. He also began composing very early. His first works - „Taniec polski i anglez”, „Taniec polski i mazur” - were published in Warsaw in 1825. During his stay in Paris he was a judge of the Paris Conservatory competitions. In 1849 he began touring Europe; he performed in Madrid and Seville (also at the royal court). Next he went to Portugal; he performed in Lisbon, where at the request of the King he reorganised the local conservatory, for which he received the Order of the Immaculate Conception of Vila Viçosa. From 1851-1853 he stayed in Berlin as a piano teacher to Princess Ludwika of Prussia and court pianist. At that time he gave concerts in many places in Germany and Austria, and he also had concert tours with his brother Apolinary to Poland, Greece, Turkey, Egypt and Italy. In the years 1854-1867 he was in St. Petersburg; there he founded the Society of Friends of Classical Music and worked as a teacher. He continued to give concerts, alone or with his brother Apolinary in many cities in Russia. There he composed the "Symphony in A minor" op.220, which he dedicated to the Tsar in the hope of receiving the position of court pianist. In 1867 he moved to London, where he lived for 16 years, occupying himself with musical education and composition. In 1883 he emigrated to the United States, initially to Buffalo, then to Michigan, where he was appointed professor of the conservatory in Grand Rapids. At the same time he made many tours of the U.S., and in 1890 also performed in Japan. In 1897 he began a world concert tour, which included Australia, New Zealand, India, China, Japan, Siam, as well as Poland and Russia. He held numerous medals and orders awarded to him by the crowned heads of Europe.
Copyright © 2013 PWM