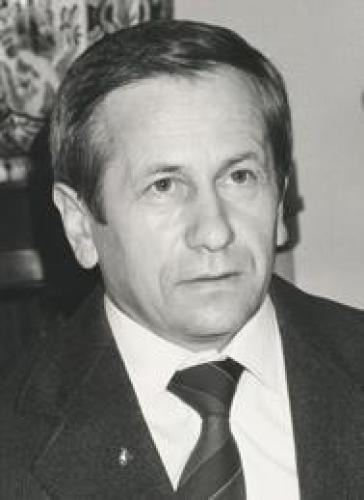 Jan Astriab (1937-2005), composer and educator. In 1963 he completed his composition studies under the direction of S.B. Poradowski at PWSM (State Higher School of Music) in Poznań. In 1973-74 he studied composition and orchestration with W. Benson and jazz music with R. Wright at the Eastman School of Music in Rochester (New York). From 1963, he taught at the PWSM (now Academy of Music) in Poznan, from 1989 as associate professor and full professor since 1992. He served as Dean of the Faculty of Composition, Conducting and Music Theory three times, and in the years 1987-1990 he was vice-rector, from 1993 he  led a research team and from 1996 - the Department of Composition and Music Theory. He propagated Polish contemporary music, and was engaged in organizational and artistic work for the Poznan Spring Music Festival and "Warsaw Autumn" and concerts as a composer. He was the winner of many awards, including PCU (Polish Composers’ Union) competitions for composers and the Karol Szymanowski competition in Warsaw, MKiS Award of the 1st Degree (1981), Artistic Award of the City of Poznań (1984). In 1995 he was awarded the Knight's Cross of the Order of Polonia Restituta.

Jan Astriab’s musical style was formed by his particular interest in harmonic phenomenon and sonoristic properties of instruments.  These were not only inspiring forces, but above all creative, both in terms of the basic constituent elements of music, as well as the formal structure of works. In his creative process, sonoristic qualities played a significant role in proper selection of sound material, the harmonic system associated with harmonic centres and spatialism as a result of the his search for new textural solutions. In the work of J. Astriab an important role was played by extra-musical inspiration associated with the emotional and spiritual experiences of man. The composer created a unique sound idiom, characterized by deep emotionalism, concentrated expression, intense musical narrative. The composer's pieces are characterised by great attention to detail and formal precision. His style is a harmonious fusion of traditional and contemporary composing techniques and materials.
(Encyklopedia Muzyczna PWM, Supplement „AB”; Janina Tatarska)
Copyright © 2013 PWM