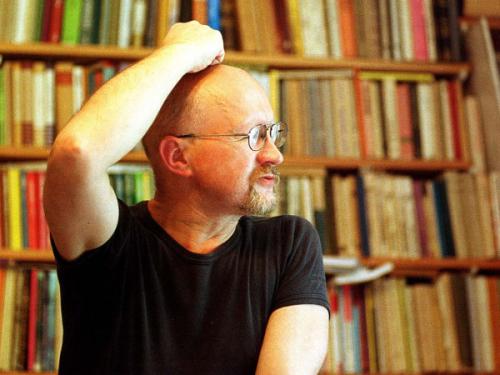 Rafał Augustyn, born 1951 in Wrocław, composer, music critic and Polish language specialist.  His composition studies were taken at the PWSM (State Higher School of Music) in Wrocław under R. Bukowski (1971–74) and the PWSM in Katowice with H.M. Górecki (Diploma in 1978). In the years 1969–74 he studied Polish language at the University of Wrocław (doctorate 1982 — Zagadnienia pokrewieństw strukturalnych w twórczości artystycznej okresu modernizmu). From 1973 he was a worker at the Instytut Filologii Polskiej of that university. In the years 1979–80 he was a lecturer of Polish language at the State University of New York in Stony Brook. A collaborator with „Ruch Muzyczn” and the monthly „Oder” and Polish Radio (amnog others, the series Nowa muzyka, nowa wrażliwość) and TVP (series Klasyk, nasz bliski). In the years 1984-1994, together with M. Pijarowski, he directed the Musica Polonica Nova festival in Wroclaw. From 1981 to 1998 he was a member of the Programming Committee of the ‘Warsaw Autumn’ festival. He is a co-founder of Brevis Music Publishers.

Works by Rafał Augustyn are characterised by: asymmetry of construction, variation technique, variable metre (common irreversible rhythms), harmony based on synthetic chords, rich colourism and strong emotionalism and a complex system of musical symbols. Some pieces betray the influence jazz music and an individual approach to repetitive music. Noteworthy are virtuoso solo works (Variations on a Theme of Paganini, Varesiana) and lyrical vocal cycles. Orchestral works are generally short and compact, while the chamber forms of music sometimes take a monumental scale (Carmina da tempore). In recent years, the composer has penetrated the area of electronic music (24-hour piece SPHAE.RA) and text-sound compositions.