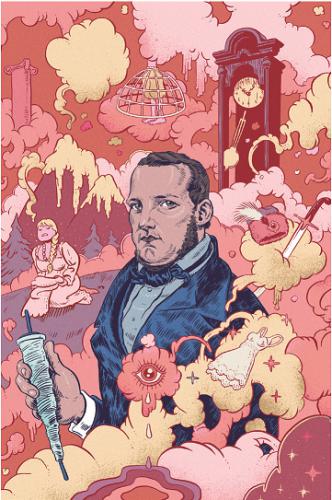 Stanisław Moniuszko - composer, conductor of operas, symphonic orchestras and choirs, as well as an educator. He was born on the 5th May, 1819 near Minsk, and died on the 4thJune, 1872 in Warsaw.
Despite of the non-distinctive posture, Stanisław Moniuszko made an incredible career. He was very distinguished and polite person. He approached the performance of his works with great attention, devoting himself to conducting especially his own pieces. From early childhood, he interacted with an art - in the family Moniuszko’s mansion in Ubiel, commonly known songs were sung, and amateur theatrical performances took place. Moniuszko was constantly surrounded by Polish folk music. He received the right musical education in Berlin, where he came up with the idea of publishing songs for Polish poets. He spent many years in Vilnius - there was the premiere of Halka, probably the most famous Polish opera, which tells the story of the tragic love of Halina's highlander to Janusz's nobleman. Afterwards, Moniuszko extended it to four acts, and the premiere of this version ten years later in Warsaw provided the creator with the position of the first conductor of the Polish Opera at the Grand Theater in Warsaw. From day to day, Moniuszko from provincial musician became a sought-after composer. The artist's next triumph was the opera The Haunted Mansion, which presents witty love on the background of political events .
Moniuszko's melodic songs, published in collections called Domestic Songs, were approved by Poles. Domestic performances of patriotic and lyrical songs kept up the national identity and imposed the rhythm of the work of the spinner. He masterfully combined music with the poems of the greatest Polish poets such as Mickiewicz or Kraszewski - Moniuszko set a new direction for the development of the Polish national song.
Stanisław Moniuszko died suddenly of a heart attack. He was buried at the Powązki Cemetery in Warsaw. His funeral has become a national manifestation.

The Seym of the Republic of Poland established the year 2019 with the Stanisław Moniuszko’s year.