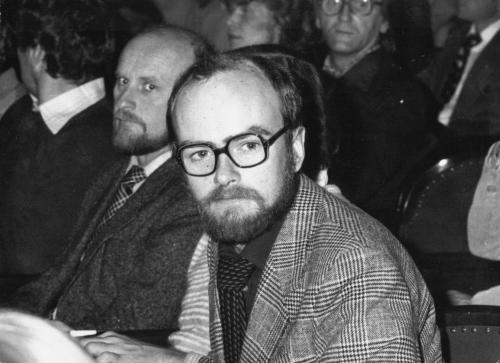 Paweł Buczyński was born on 7 April 1953, in Laski, Polish composer. In the years 1974 to 1979, he studied composition with Tadeusz Baird at the PWSM in Warsaw. In 1983-84 he continued his studies at the Hochschule für Musik in Vienna under the direction of Roman Haubenstock-Ramati with an Austrian government scholarship. He participated in the International Summer Courses for New Music in Darmstadt (1980, 1982, 1984) and the International Young Composers' Workshop in Borovets in Bulgaria (1982). Since 1979 he works at the Music Academy in Warsaw, where in the years 1983-1986 he was deputy Dean of the Faculty of Composition, Conducting and Music Theory. In the ‘80s and ‘90s he held various positions in the Main Board and the Branch Board of the Warsaw Branch of the Polish Composers' Union. In the years 1990-1994 he taught at the PWST in Warsaw. He is the winner of several composition competitions: 1977 - First prize at the Youth Forum in Krakow for "String Quartet", 1980 - First prize at the Youth Competition of the Polish Composers’ Union for "Music of falling leaves for string orchestra," 1985 – a distinction at the International Rostrum of Composers in Paris for "Music of falling leaves."
Copyright © 2013 PWM