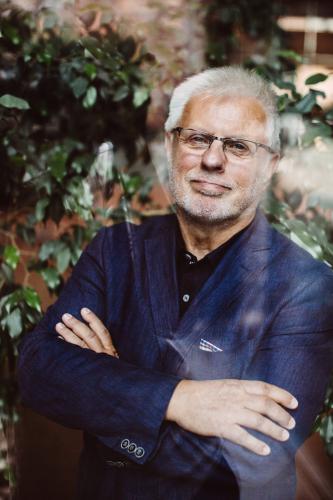 Born in 1951, in Ruda Śląska, Eugeniusz Knapik studied composition with Henryk Mikołaj Górecki and piano with Czesław Stańczyk at the State College of Music (now Academy of Music) in Katowice, where he has worked since 1976: since 1992, he has run his own Computer and Electroacoustic Music Studio; since 1996, he has also been head of the Faculty of Composition, Conducting and Music Theory; from 2002 to 2008, he was vice-chancellor of the Academy.

Knapik made his debut as a composer in the ‘Young Musicians for a Young City’ (MMMM) festival in Stalowa Wola (alongside Andrzej Krzanowski and Aleksander Lasoń; these three composers are often dubbed the ‘Stalowa Wola generation’). It was there that two of his works were given their first performance: 'Tak jak nad brzegiem morza' [As on the seashore] for instrumental ensemble and tape (1977) and 'Corale, interludio e aria' for flute, harpsichord and eleven string instruments (1979).

His compositions very soon gained critical acclaim and won numerous prizes, including second prize in the Polish Composers Union’s ‘Young Composers Competition’ (1976) for 'Le Chant', third prize in an international chamber music competition in Vienna (1977) for 'Concerto Grosso', first prize in the MMMM youth festival in Stalowa Wola (1979) for 'Corale, interludio e aria', and the Stanisław Wyspiański Prize for 'Wyspy' [Islands] for string orchestra (1985). His 'String Quartet' won first prize in the International Rostrum of Composers in Paris (1984). In 1985, he was awarded the Polihymnia Prize for his chamber music, which was the principal domain of his artistic work during the early years in his career. Soon, his priority became the project for a huge stage work – a work that was far removed from the musical style of his earlier chamber works.

In 1988, to a commission from the director of La Monnaie in Brussels, Gerard Mortier, he began work on the operatic trilogy 'The Minds of Helena Troubleyn', to words by Jan Fabre, which determined the direction of his compositional work for years to come. In the music of that cycle, he revealed his predilection for monumental forces and a sound language drawing on the arsenal of modernist means.

He has also collaborated with Jan Fabre on three ballet shows that enjoy unwaning success around the world, as attested by the impressive number of performances, including in Amsterdam, Ottawa, Antwerp, Berlin, Paris, Frankfurt, Barcelona, Salzburg and Tokyo.

Eugeniusz Knapik is an excellent pianist (he has not performed in concert for several years). He has appeared as a soloist and chamber musician in Poland and abroad, working with the Silesian Quartet, Konstanty Andrzej Kulka, Aureli Błaszczok and Piotr Pławner, among others. He was the first pianist in Poland to perform Olivier Messiaen’s 'Vingt Regards sur l’Enfant-Jésus'.