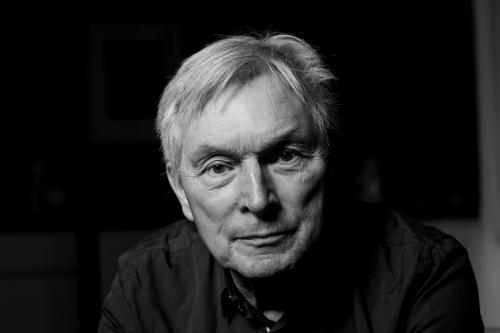 Zygmunt Krauze is an important artist of his generation: a respected composer, valued pianist, educator, organiser of musical events and a judge in many international competitions. His artistic achievements and efforts in the promotion of music have been recognised with many awards and distinctions, including the French National Order of the Legion of Honour (2007) and the Chevalier dans l’Ordre des Arts et des Lettres (1984). In 1987 he was appointed President of the International Society for Contemporary Music and has been an honorary member of the organization since 1999. In 2011, Krauze became an honorary member of the Polish Composers' Union and a year later he was awarded the title of Coryphaeus of Polish Music in the category of Personality of the Year.

Krauze’s compositions include five operas: The Star (1981), Balthazar (2001), Yvonne, Princess of Burgundy (2004), Polyeucte (2010) and The Trap (2011). They were staged in such theatres as the National Theater in Mannheim, Theatre National de la Colline in Paris, Staatsoper Theater in Hamburg, Teatr Wielki in Warsaw, Opera Wrocławska, Warszawska Opera Kameralna and Théâtre du Capitole in Toulouse.

In 2012 a staging of the opera Polyeucte received the award of the French Syndicat de la critique Théâtre, Musique et Danse as the best musical creation of the year.

The instrumental forms employed by Krauze vary from miniatures to symphonic works engaging hundreds of musicians. In his compositions, piano is the instrument given the highest priority. As an actively performing pianist, Krauze not only composes for this instrument, but also performs his own compositions. This applies both to his early work, such as Six Folk Melodies (1958), through compositions resulting from experimentation with musical notation i.e. Five Unitary Piano Pieces (1963) and Triptych (1964), later experiments with the sound of the piano in Stone Music (1972), Arabesque (1983), and Adieu (2001), theatrical games in Gloves Music (1972) or One Piano Eight Hands (1973) and piano concertos (1976, 1996) where virtuosity is combined with a strong emotional charge.

Unitary music is exceptionally important in the list of Krauze’s work. As he says: „The sound is individual enough to make it possible to distinguish it from the chaos of other music and other sounds. The performed composition has the ability to put time in order. (...) The beginning of each composition immediately exposes the entire range of sounds and during the piece nothing new is introduced. There will be no surprises. (...) This music creates the space for a different way of being perceived. A perfect situation would occur if the music were continually present, the listener came at the time that he or she felt convenient and left when the right moment right to do so was found.” The theoretical base of unitary art comes from the paintings of Władysław Strzemiński. Examples of Krauze’s unitary music are Polychromy (1968), Piece for Orchestra No. 1 (1969), String Quartet No. 2 (1970) and String Quartet No. 3 (1982).

Music for theatre is also present among Krauze’s compositions. He has been collaborating with Jorge Lavelli, an Argentinian director living in France, for over three decades. From this collaboration some musical illustrations grew to plays staged in the Comédie-Française and in the Theatre National de la Colline in Paris, including Polyeucte by Pierre Corneille (1987), Opérette by Witold Gombrowicz (1988), Macbeth by Eugène Ionesco (1992), Merlin by Tankred Dorst (2005), Oedipus Rex by Sophocles (2008) and El Avaro by Moliere.

The last, however, not least important, group of works are choral pieces and songs. The most notable among them are compositions from recent years: Ball In The Opera (2006) for chamber choir and 12 instruments based on Julian Tuwim's text, and Voyage de Chopin (2010) for a chamber choir a cappella, or with an ensemble of folk instruments, based on Chopin's letters. Five Songs for Baritone and Piano (2010) is influenced by the poetry of Tadeusz Różewicz (2010) and La Terre (1995) for soprano, piano and orchestra, illustrates Yves Bonnefoy’s poems.

Krauze is often invited to cooperate with foreign cultural institutions. Nearly all of his compositions are commissioned. His most important partners are: the Ministries of Culture of Poland and France, Austrian Radio, Westdeutscher Rundfunk in Cologne, Südwestrundfunk Radio in Baden-Baden, the Gulbenkian Foundation in Lisbon, Suntory Limited in Tokyo, the National Theater in Mannheim, Radio France and Polish Radio. Zygmunt Krauze's compositions have been performed at numerous music festivals both in Poland and abroad, as well as in renowned concert halls, such as Wiener Konzerthaus, Concertgebouw in Amsterdam, Bellas Artes in Mexico City, Palais de Festival in Cannes and Beethovenshalle in Bonn. Many of his compositions have been recorded and released on records of Polskie Nagrania, DUX, ORF, Nonesuch, Thesis, Musical Observations (CP2), Collins Classics, Warner Classics, Recommended Records and EMI.

Krauze’s composition studies were completed under the supervision of Kazimierz Sikorski and his piano studies were supervised by Maria Wiłkomirska at the PWSM (Higher State School of Music) in Warsaw. He obtained a French governmental scholarship and worked under the supervision of Nadia Boulanger. Soon after, he began sharing his knowledge with young students of composition and has done so until today. Since 1965 he has been conducting seminars and composition courses in Darmstadt, Basel, Paris, Tokyo, Stockholm, Jerusalem, Beijing, Hong Kong and at universities in the USA: Indiana University at Bloomington and the University of California in Santa Barbara. During 1973-1974 he worked in Berlin as an artist-in-residence invited by the Deutcher Akademischer Austauschdienst. In 1981, he was a Visiting Professor at Yale University in New Haven and in 1996 he received the title of Eminent Corresponding Professor in Keimyung University in Daegu, South Korea. In 2002, he was appointed as a Professor of Composition at the Academy of Music in Łódź and from 2006 he has been lecturing at the Fryderyk Chopin University of Music in Warsaw. In May 2013 Krauze was awarded the degree of Doctor honoris causa of National Music University in Bucarest.

In 1966 Zygmunt Krauze received First Prize at the Gaudeamus International Interpreters Competititon (in the Netherlands) for performers of contemporary music. Since then he has performed at many of the most important stages of the world. He has been working with such conductors as Gary Bertini, Jan Krenz, Leif Segerstam, Kazimierz Kord, Kazuyoshi Akiyama, Ernest Bour, Hans Zender, Peter Eötvös, Antoni Wit and Luca Pfaff. In 1967, he founded his ensemble Warsztat Muzyczny (Music Workshop), which he directed for 25 years. The ensemble commissioned over 100 compositions that were created by renowned composers from around the world, including: Louis Andriessen, Morton Feldman, Michael Nyman, Per Nørgård, Mauricio Kagel, Henryk Górecki, Wojciech Kilar, Kazimierz Serocki and Witold Szalonek. Krauze was one of the first composers in Poland to employ new performance forms, for example, musical space compositions (installations). He collaborated with architects: Teresa Kelm in the Contemporary Gallery in Warsaw (1968, 1970), Wiesław Nowak and Jan Muniak in Metz (1987) and in the Museum of Contemporary Art in Łódź, as well as in the natural setting of the Eggenberg Castle in Graz (1974) and the Rohan Palace in Strasburg.

Krauze's activity as an organiser of musical events began in 1970 when he became a member of the Repertoire Committee of the Warsaw Autumn Festival. He held this position for 11 years. In 1980, his efforts led to the revival of the Polish Society for Contemporary Music and hewas its president for the next two decades. At the invitation of Pierre Boulez in 1982, he became an artistic advisor at the Institut de Recherche de Coordination Acoustique/Musique (IRCAM). In 1983-84 he hosted weekly music programs at Radio France Musique. He was one of the founding members of the Witold Lutosławski Society and for one term held the position of its president. For 13 years he has been the artistic director of the Music Gardens Foundation, which every year organises a month long Music Gardens Summer Festival at the Royal Castle in Warsaw. He is regularly invited to be a judge in international composition competitions throughout the world.

The Polish musical community honoured Krauze with an award of the Polish Composers' Union (1998), twice he received the award of the Ministry of Culture (1989, 2005) and a 'Gloria Artis' golden medal.