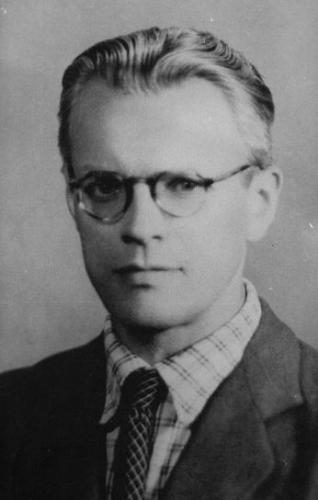 Jerzy Albert Lefeld, born 17 January, 1898 in Warsaw, died on 22 February 1980 in Warsaw, Polish pianist, composer, pedagogue. He initially studied music with L. Prüfferowa and S. Judycki (piano). From 1908 he was educated at the Music Institute in Warsaw, where he completed piano studies in the class of A. Michałowski (1916) and composition under the direction of R. Statkowski (1917). He became involved with the Institute, later the Conservatory, in a long-term teaching collaboration (1917-1939). In the period 1924-1926 he also collaborated with the experimental radio studio in Warsaw and from 1926 with the Polish Radio (including as a member of the Polish Radio Little Orchestra conducted by J. Ozimiński). In the years 1941-1944 he worked as a teacher and played in cafes and private homes. After the war he led the piano class at the PWSM in Warsaw (until 1971). During more than 60 years of pedagogical activity he taught 40 pianists (his pupils included Witold Lutosławski, S. Kisielewski and – at an intermediate level - W. Małcużyński). Lefeld was an outstanding pianist-chamber musician. Already in his youth he occupied accompaniment, playing with his father, an amateur tenor. In the years 1917-1926 he performed with S. Barcewicz at more than 100 concerts. The list of artists with whom he performed contains the names of more than 50 singers (including S. Korwin-Szymanowska, A. Sari, E. Bandrowska-Turska, W. Wermińska, W. Brégy, W. Calma, A. Orda, B. Paprocki, A. Hiolski, S. Woytowicz, J. Artysz) and about 30 different instrumentalists (including K. Flesch, P. Hindemith, I. Haendel, Z. Francescati, R. Ricci, I. Dubiska, E . Umińska, W. Kochański, E. Kochański, W. Wiłkomirska, K.A. Kulka). He also played piano duets with Z. Rabcewiczowa (recordings include Chopin’s "Rondo in C major" for two pianos), R. Maciejewski, M. Wiłkomirska, W. Szpilman. As a composer, he made his debut at the Warsaw Philharmonic with two symphonies ("Symphony I" - 1919, conducted by Z. Birnabaum, "Symphony II" - 1925, conducted by J. Ozimiński). Both symphonies were performed again in the ‘70s by WOSPRiT ("I" - 1978, cond. J. Maksymiuk, "II" - 1979, cond. W. Michniewski). Lefeld received the State Award second degree (1955), the music award of the City of Warsaw (1957) and the prize of the Minister of Culture and Arts, first degree (1965).
Copyright © 2013 PWM