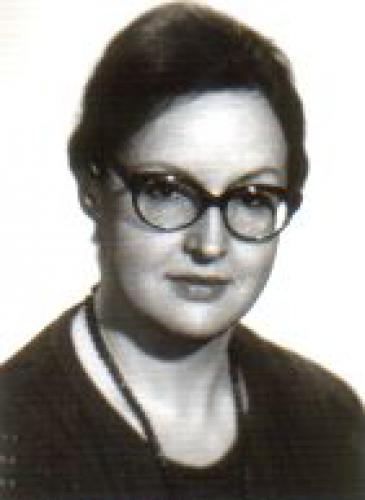 Born in Cracow, a doctor of humanities in the domain of the theory of music. In 1960 she graduated from the State Higher Music School in Cracow where she had studied at the faculty of the Theory of Music under Antoni Frączkiewicz. In 1972 she obtained a doctor's degree at the Academy of Music in Warsaw under Bolesław Woytowicz. She was an academic teacher and researcher at the State Higher Music School (later Academy of Music) in Cracow (1960-1993), the Teachers' Training College in Kielce (1973-82, the Faculty of Music Education) and the Teachers' Training College in Cracow (1982-86, Institute of Primary Education). Between 1967-1988 she collaborated with COPSA (Main Teaching Centre of Artistic Schooling). Between 1983-90 she was the head of the Aural Training Department of the Academy of Music in Cracow. She has won many awards for her activities, including a Gold Cross of Merit (1983), the Prize of the Ministry of Culture and Art, second degree (1974), and twice, the last-mentioned prize, first degree.

She specialized in aural training, harmony and counterpoint. She had led numerous seminars and has supervised 247 MA theses. She was the author of several dozen publications from the domain of aural training and piano for children. She had worked out aural training teaching curricula (for secondary music schools, Music Education faculties of Teachers' Training Colleges, and all the faculties of the Academies of Music). She had given several dozen lectures all over Poland and has published numerous articles. In response to a commission from COPSA, she has formulated the criteria of entrance examinations for academies of music, those of the organization of aural training classes at the vocal faculty of Cracow Academy of Music as well as the forms of contact between Academy of Music teachers and secondary music schools. Together with J. Noworol and J. Rychlik she has worked out a set of tests for examining musical listening during entrance examinations at the Academy of Music.