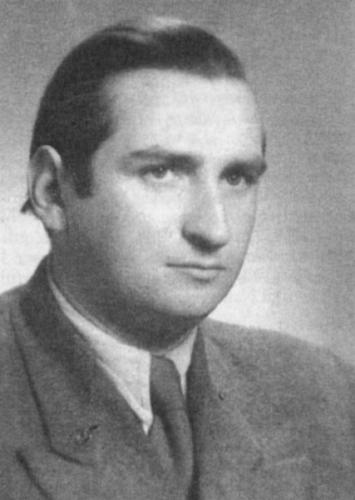 Tadeusz Machl, born on 22 October 1922 in Lviv, a Polish composer, pedagogue and organist. Over the period 1934-40 he was attending the music school of Sabina Kasparek (piano under Helena Kasparek, music theory under S. Lachowska, J. Freiheiter and A. Sołtys); after the incursion of the German army into Lviv, he was taking part in confidential concerts organised by J. Swatoń; from 1944 to 19946 he was a choir accompanist at the Saint Wincenty a Paulo Church, and an organist at the Saint Elisabeth Church. In 1946, he emigrated to Szczecin, where he was teaching for a short time at music school. In 1947 he started to live in Cracow, in 1947-50 he was working as an organist at the Corpus Christi Church, in 1950-54 he was a copy editor, proof-reader and an editor of the PWM, in 1949-52 Machl was studying composition under A. Malawski, and organ under B. Rutkowski, at the State Higher School of Music in Cracow. Machl’s fascination with this instrument, evincing in practical knowledge of playing the organ (1950 – 3rd prize at the Bach International Competition in Poznań), in deep and extensive knowledge about history and technical-sound features of the organ built in Poland and abroad, had a decisive impact on his creative output. Already in the 30s, he debuted in Lviv with the small piano pieces and a fragment of Stabat Mater; in Cracow he played for the first time in 1949 (Obrazki wiejskie [Rustic Pictures] performed by Cracow Philharmonic). In 1954 he received a distinction at the 1st Polish Music Festival for his Organ Concerto No. 1, and twice at the International Composition Competition in Liége: in 1956 for his String Quartet No. 1 and in 1959 for his String Quartet No. 2. In 1959 he was in France as a scholar, where he got in touch with N. Boulanger, studied works by French composers who were combining the organ with the orchestra, and preserving the aesthetic ideas of C. Franck and V. d’Indy. From 1952 he was teaching composition, instrumentation and other theoretical courses, at the State Higher School of Music (currently Music Academy) in Cracow. From 1976 as an associate professor, 1988 – full professor, 1992 – professor emeritus; therein, in 1965-72 he was a director of the composition faculty, 1966-69 a dean of the Department of Composition, Theory and Conducting, 1969-72 vice-rector, 1973-83 Machl was also lecturing at the Higher School of Education in Kielce, 1982-93 at the Department of History and Music Theory of JU. He was, among others, a member of the Higher Artistic Education Council which worked with the Ministry of Culture and Art (1969-72, 1976-79), secretary of the Audit Committee of the General Board of the Polish Composers’ Union (1970–72, 1974–76), a leader of the Choirs and Amateur Orchestras Association in Cracow (1979-83). He worked also a conductor of a choir in the Corpus Christi Church in Cracow (1960-74). and of a male-voice choir Lutnia (1976-80). Machl’s strong emotional ties with Lviv, the city of his childhood and youth, is evident in the dedications of his instrumental works (Moje miasto [My City], Symphony No. 6 dedicated to ‘my city’), as well as in the series of memories released in the bulletins of the Lovers of Lviv and South-Eastern Borderlands. Machl was awarded many decorations for his compositional and educational work, such as the Orders of Polonia Restituta: the Knight’s Cross (1972) and the Officer’s Cross (1988), he received twice the 1st degree award of the Ministry of Culture and Science, and was also awarded the title of Meritorious Teacher of PPR (1989).

Machl was one of the most remarkable contemporary Polish composers of organ music. His aesthetics was considerably influenced by the French-Russian music traditions: great skill in instrumentation and treating the organ as a virtuoso-concerto-like instrument incorporated in an orchestra ensemble. He was one the few composers debuting after the World War II who did not give in to pressure of the “second avant-garde” which was holding to artistic experiments and preaching historical necessity of breaking with traditional sound and formal rules. Due to the preferences for artistic expressions (organ, large orchestral ensemble), and the way of structuring clearly shaped form (the idea of imitative polyphony, evolutionary development of melodic motif, expressive culminations and sound contrasts), Machl’s works are rather homogeneous, but in his composing technique can be noticed peculiar adaptation of the main trends in the pitch organization (dodecaphony) and a free treatment of the written notes duration, emphasising the sonoristic means of expression, combining the traditional score with audiotape, employment of topophonic effects, as well as the concept of aleatorism with regard to form. From this point of view, Machl’s oeuvre can be divided into 3 periods, which are also particularly marked with the usage techniques of playing.

During the 40s and the 50s – in addition to 2 string quartets, several piano and organ pieces – mainly the orchestral pieces were composed, including Symphonic Variations, Lyrical Suite, and 5 symphonies, varied in terms of form and ensemble. For instance, Symphony No. 3, also called as Symphonic Overture ‘The Tatra’, is in one movement, No. 4 and 5 consist of 4 movements; vocal medium is used in the first one (as a mixed choir) and the fifth (as a soprano vocalisation). Organ concertos composed during the 50s consolidated the character of Machl’s compositional skills, who was excellent at instrumentation – also of early music (J.S. Bach and A. Corelli) – as well an outstanding organist, forming the dynamic-colourful sound relationships. In the first period of his career, Machl continues and develops the sound and formal propositions of neoclassicists, for example he uses ostinato sound patterns, changes metres, employs Stravinsky-like articulation effect: simultaneous legato-staccato of the same pitch notes (e.g. in the I mov. of Lyrical Suite), prefers cyclic forms contrasting with regard to style and colour. The subjects of the vocal-instrumental works composed in this period reflect the contemporaneous course of history; already after the war he composed Stabat Mater (1945), and in the period of socialist realism – cantata A Day of Work and Youth Cantata. The 60s and the 70s were the times of the second period of Machl’s artistic development. He composed solo concertos with orch. for different instruments: piano, violin, cello or viola, harp, French horn, trumpet, harpsichord (1962), also Double Concerto for piano and harpsichord (1968) and Concerto for voice. The organ – as an instrument playing with orch. – was used in a new way. The composer combined it with the two pianos (Triple Concerto for 2 pianos and organ 1971), as well as contrasted the organ sound with two varied orchestral ensembles (Organ Concerto for 2 orchestras: string quintet with harp, and the big-band-like wind instruments). Employing a specific design of the baroque organ in the Cathedral in Leżajsk, Machl composed Concerto for three organs and symphony orchestra in which he used, among others, the topophonic effect, suggesting an appropriate setting of the orchestral ensemble in the church. According to composer’s suggestion, this piece can be also performed in other halls on a one pipe instrument and two electronic organs, or on three electronic ones. For the organ in Leżajsk is also composed Sonata for three organs. Traditional orchestral ensemble accompanying solo instrument is usually very extended (e.g. Violin Concerto is enriched with organ, harp, piano and harpsichord), but occasionally the composer changes the proportions of sound (e.g. in the Triple Concerto for 2 pianos and organ he does not use woodwinds and adds percussion instruments). In the second period of Machl’s development, his organ music repertoire was enriched with varied in terms of expression and texture solo pieces (including Deux pieces pour grand orgue, Piece en cinque movuvements, Triptych, Mini-suite), in which the composer employed linear music passages with a peculiar simplicity, as well as the sonoristic effects. In the 60s Machl adapted the twelve tone idea, however, not as a basic series by Schoenberg, which determines an abstract row of pitch-classes, but as a stable interval structure, as concerns the motion and melos, creating an expressive, repeated many times, structural whole. In the period of abounding avant-garde experiments, Machl was composing concertos for the “bygone” instruments (harp, harpsichord, organ), searching for new effects of their sound juxtaposed with an orchestra. In the vocal-instrumental works, Machl was continuing the neoromantic tradition, and was also using innovative, sonoristic potential of human voice. While in the Concerto for voice and cantata Icarus’ Flight (with a subtitle Concerto for Voice) the soprano was treated mainly as a source of diverse colouration sound, connected with, among others, quasi recitativo articulation, cantabile, staccato, trill (in the Icarus’ Flight, recited text – excerpts from Metamorphoses by Ovid – appears only in the middle section), in the cantata Blue Cross composer combined traditional sound of voices and instruments with the sonoristic effects subordinate to the expression of the lyrics. Machl’s cantatas are the testimony of his fascination with sensualistic phenomenon of Icarus’ flight and myth (Icarus’ Flight), and the atmosphere of the alpine landscape concealing human tragedies (Blue Cross).

Among the pieces composed in the last period of Machl’s development (from the middle of the 70s), solo organ music prevails: large forms called fantasies, improvisations, poems and diversly structured program miniatures, which are put in the cycles, e.g. Landscapes – a cycle of 16 fugues with preludes whose titles suggest the Tatra landscape, Rupicaprae – a collection of studies associated with the image of chamois; the titles of expressively and texturally varied Fifteen Rosary Poems evoke the religious topics, similarly to Forty-five Preludes on the Themes of Polish Religious Songs. Searching for new sound combination, Machl juxtaposes organ with diverse instrumental chamber ensembles, e.g. Herbarium (the piece about “botanical” program suggestions, in which the titles of the successive fragments are the Latin terms for mountain herbs), Terrarium, Stained-glass Windows. In Herbarium, the composer alluded to the idea of open form, considering the possibility of performing the whole piece, or its part, by the incomplete instrumental ensemble and subordinating to the given instruments and performers’ decision about the assembly of respective fragments for solo instruments or their diverse sets. Postmodern trends – evident in, among others, a preference for euphonic sound, expressive melodic line, known quotations from the Polish religious songs or Polish Highland folk music – were reflected mainly in the orchestral works, which were the continuation of the idea of symphonic poem. Their program titles suggest a general emotional mood (Threnody, Serenade) evoke the image of a mountain landscape and the impression of a flight (Night on Kazalnica, Silver Wings), as well as a characteristic climate of composer’s home town – Lviv (My City, Symphony No. 6 ‘Desideri’). In vocal works with organ, the composer used the liturgical texts (Requiem dedicated to “those, who were climbing the peaks and fall off too soon”, Mass). While in the first and the second period of his creative output Machl was using changing metre (e.g. in the III mov. of the Concerto for harpsichord almost every bar has different metre), in the works from the 70s and the 80s the metre is rather stable, but the composer in a peculiar way adapted the aleatoric ideas, as regards the organisation of time, to organ music, e.g. in the Landscapes, Fifteen Rosary Poems, Organ Concerto No. 7 there is an added arrow (one- or two-way), which suggests a possibility of adjusting the duration of traditionally written notes to the acoustics of a venue and to the sound dynamics of a given instrument. In his scores, Machl also proposed the system of a symbolic indication of registration clefs in an organ.

The main aspect of all Machl’s works is constituted by a consistent and diverse structuring of an imitative polyphonic texture and a fugue form rooted in the tradition of baroque music. Fugues, fugatos, as well as canons, appear in the pieces for organ (e.g. Quadruple Fugue; Landscapes; Chorale, cantabile, fugue) orchestra (e.g. fugues in the II mov. of the Organ Concerto No. 4 for organ and string orch., in the III mov. of the Concerto for voice, in the I mov. of the Concerto for three organs) as well as for vocal-instrumental ensembles (e.g. fugatos and double canons in Requiem). The composer liked to employ the BACH motif (among others in Grand Organ Fantasy). Organ works by Machl constitute the repertoire of Polish virtuoso organists.