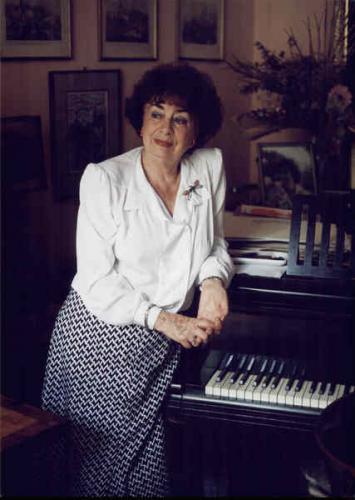 Krystyna Moszumańska-Nazar, the Polish composer, a graduate of the State Higher Music School (now the Academy of Music) in Cracow, was born on 5 September 1924 in Lvov. She studied the piano with Jan Hoffman and composition with Stanisław Wiechowicz, gaining diplomas in both areas in 1955. In 1963 she started to work as a teacher in the Cracow Academy, with which she was connected ever since. She lectures on composition, instrumentation, fugue and the contemporary compositional techniques. Between 1974-75 she was Head of the Composition Department of the Cracow Academy; then she performed the duties of the Dean of the Faculty of Composition, Conducting and Theory of Music (1975-79). In 1978 she became Vice-rector and between 1987-93 she held the post of Rector of this institution. Between 1964-71 she performed the function of the chairman of the Cracow Branch of the Polish Composers' Union and between 1971-73 she was active in the Main Management of the Polish Composers' Union. She has sat on juries of many Polish and foreign composition competitions. Between 1993-1999 she was a member of the Council for the Higher Artistic Schools.

She has given many lectures on her works, contemporary music and the new notation in Poland and abroad (Leipzig, Mannheim, Heidelberg, Nuremberg, Lvov). In 1994 a television film entitled Krystyna Moszumańska-Nazarwas made as part of the cycle Albums of Cracow Music.