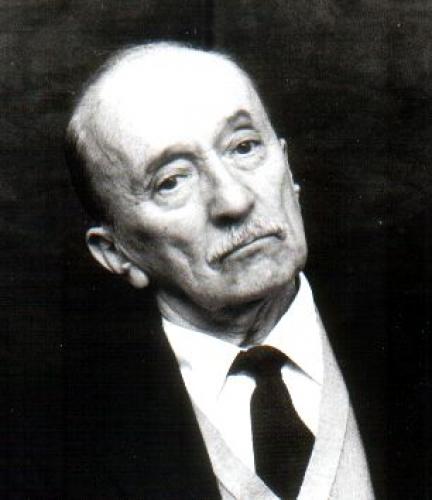 Roman Palester, the composer, was born on 28 December 1907 at Śniatyn (Podole region) and died on 25 August 1989 in Paris. In 1925 he enrolled at the Faculty of Philosophy of Warsaw University to read history of art; simultaneously he studied for a short time theory of music in the class of Piotr Rytel at the Warsaw Conservatory. He resumed his musical studies in 1928, gaining a diploma in composition in 1931 in the class of Kazimierz Sikorski.

In 1930-39 he wrote compositions which were performed many times in Poland and abroad, winning commendation and prizes: Symphonic Music performed at the 9th Festival of International Society for Contemporary Music in London (1931), Psalm V(2nd prize at the competition of the Singing Societies’ Union of the Wielkopolska Region in Poznań in 1932), Dance from Osmołoda, Symphony No. 1, Symphonic Suite, two String Quartets, Variations for chamber orchestra (1st prize at the competition of the Polish Music Publishing Society in 1935), and the ballet Song of the Earthawarded a Gold Medal at the World Exhibition in Paris in 1937. Palester also composed music for the first Polish sound films, theatre plays and radio broadcasts. He worked with such stage managers as Leon Schiller and Juliusz Osterwa. He took an active part in many fields of musical life. He published articles in Musical Quarterly, Music and Polish Music. He also held office in such societies as the Polish Composers’ Union (general secretary) and the Polish section of the International Society for Contemporary Music (vice-president); he was also active in the Musical Council of the Society for the Cultivation of Polish Art Among Foreigners; from 1938 he was a member of the Young Polish Musicians’ Society and in 1939 – the secretary of the 17th Festival of the International Society for Contemporary Music.

After the war Palester settled in Cracow, engaging in the organization of musical life: he became vice-rector and composition professor at the Cracow Higher School of Music, vice-president of the Main Management and president of the Cracow Branch of the Polish Composers’ Union, a member of the Programme Council of PWM Edition and the Programme Committee of Musical Education, as well as the Theatrical Council at the Ministry of Culture and Art. At that time his works were very often performed and his music for the first post-war Polish films (Forbidden Songs, The Last Stage and so on) earned him popularity. He was recognized as one of Poland’s most outstanding contemporary composers.

In 1947 he left for Paris but maintained regular contacts with his native country. In 1949 he took part at the All-Polish Congress of Composers and Musical Critics at Łagów. His conflict with musical circles and the authorities grew increasingly intense and finally, in 1951, Palester decided to emigrate to Paris. He gave up his membership of the Association of Stage Artists and Composers (ZAiKS) and joined the Paris Société des Auteurs, Compositeurs et Editeurs de Musique. In his native country the composer was removed from the list of members of the Polish Composers’ Union and was subject to total censorship, with performance of his works banned, published scores withdrawn from circulation and destroyed and his name removed from film credits.


From 1952 to 1972 he lived in Munich and worked in the Polish section of Radio Free Europe in the cultural department. Many significant compositions were written at that time including Sonnets to Orpheus (1951-52), Threnodies. Three Excerpts from Jan Kochanowski (1950-51), Variations for orchestra(1955) and successive symphonies. In 1962 one of the composer’s best works Don Juan’s Death – a “musical action” – won 1st prize at the international competition for an operatic work organized by the Italian section of the International Society for Contemporary Music. After he had retired in 1972, he settled in Paris and devoted himself exclusively to composing. He also composed Metamorphoses (1966-68), Concerto for Viola (1975-78), Te Deum (1979) and the Fifth Symphony (1977-81). In 1965 he received the A. Jurzykowski Prize in New York and in 1967 in London was decorated with the Gold Cross of Merit of the Polish Republic.

At that time the works of the censored composer were completely unknown in Poland. It was only in 1977 that the first performances took place (“Warsaw Autumn”, radio). In 1980s in Poland the world premiere of Hymnus pro gratiarum actione (Te Deum)took place in Cracow (1983), with the composer’s participation (his only return visit to his native country), along with that of the Fifth Symphony – in Warsaw (1988).