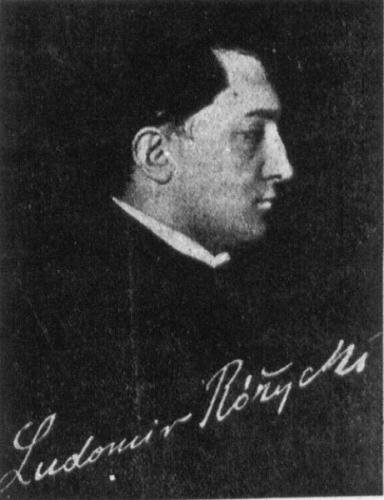 Ludomir Różycki was born on 18 September 1883 in Warsaw. His father was a Professor at the Warsaw Conservatory. Ludomir studied there under the tutelage of Aleksander Michałowski (piano) and Zygmunt Noskowski (composition). In Noskowski’s class he became friends with Karłowicz (a few years older than Różycki), then with Szymanowski, Fitelberg and Szetula (this group later went on to be known as composers of the Young Poland period). After graduating from the Conservatory with a gold medal, Różycki continued his studies for a further three years at the Academy of Music in Berlin under the tutelage of Engelbert Humperdinck. He started his independent artistic career in 1907 in Lviv where he worked as an opera kapellmeister and a piano professor at the local conservatory; his first opera, “Bolesław the Generous” was staged there. After four years he moved to Warsaw where he received the first prize at the composition contest for his symphonic poem “King Kofetua”. Then he went abroad: to Switzerland, Italy, France and Germany. During that period he wrote his most remarkable compositions: „Piano quintet” and the opera „Eros and Psyche”. In 1918 he settled in Warsaw. The Warsaw Opera was staging „Eros and Psyche”, later the ballet “Mr Twardowski”, the operas “Devil’s Mill” and“Mrs Walewska” and the ballet “Apollo and the Girl”.

Apart from being a musician, Różycki was also a publicist and he took interest in social matters; he was one of the founders and the first chairman of the Polish Composers’ Union. After the war he moved to Katowice. At that time he composed little, devoting most of his time to reconstructing the scores of his operas, which were burnt during the Warsaw Uprising. He died on 1 January 1953 in Katowice. (J. Kański, Przewodnik operowy, PWM 2001)
Copyright © 2013 PWM