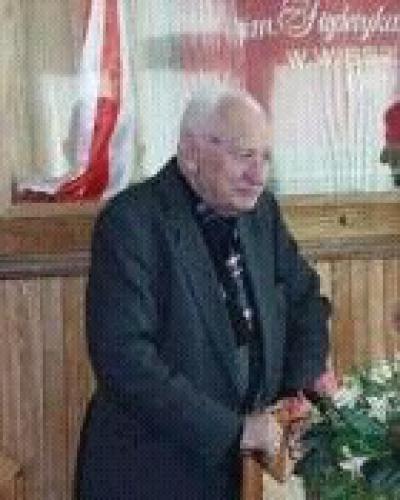 Composer, pedagogue, music theorist and historian, born March 14, 1913, Sebezh (Russia). He died on February 29, 2004. In 1936 he received a degree in Slavic philology at Stefan Batory University in Vilnius, and in 1937 graduated from Vilnius Conservatoire, where he studied composition under the tutelage of Tadeusz Szeligowski and piano with Stanisław Szpinalski. In 1938-39, he was in Paris for complementary studies, improving his composition skills under Nadia Boulanger and Charles Koechlin. At the same time he studied the theory of rhythm according to Dom André Mocquereau at the Gregorian Institute. This gave rise to the research that led to the establishment by Witold Rudziński of an original system of musical rhythm. After returning to Poland in the years 1939-1942 he was professor of theory subjects at the Vilnius Conservatory. In 1943 he moved to Warsaw. After the war he became a professor at the Łódź Conservatory (1945-1947), then director of the Music Department at the Ministry of Culture and Art (1947-48) and director of the State Philharmonic and Opera Stołeczna in Warsaw (1948-49). From 1957 he taught composition and music theory at the PWSM in Warsaw, where in 1967-69, he also served as vice-rector.

He was honoured with many awards: in 1963 he received a special award in the Prince Rainier III of Monaco Competition for the opera Odprawa posłów greckich (1962), and in 1965 - I prize at the Edvard Grieg Competition in Bergen for Obrazy świętokrzyskie for symphony orchestra (1965). He was also repeatedly honoured with high state decorations, including Officer and Commander's Cross of the Order of Polonia Restituta, the title of "Distinguished Teacher" of the PRL, many awards from the Minister of Culture and the Arts. In 1998, the Warsaw Academy of Music gave him the title of Doctor Honoris Causa.