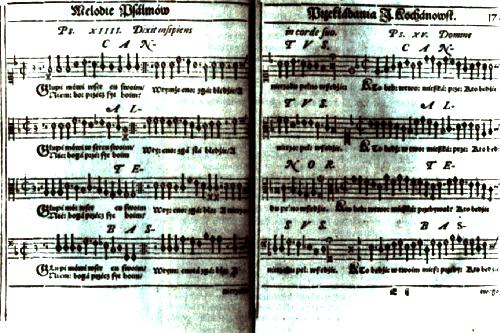 Mikołaj Gomółka was born in Sandomierz c. 1535. Between 1545-1563 he stayed at the royal court, where initially he was a descantist, learned to play the flute, the 'sztort' (an old Polish wind instrument, prototype of the bassoon), the violin and the lute, and then he became a royal chapel musician with full rights. Having left the court he fulfilled various social and legal functions in Sandomierz; for some time he stayed at the court of the Cracow bishop Piotr Myszkowski (to whom he dedicated his work Melodies for the Polish Psalter); he conducted mining researches near Muszyna and also stayed at the court of Jan Zamoyski in Cracow, where he was still living in 30 April 1591; this is the last known date of his life.

The only preserved work by Gomółka is a collection of 150 independent compositions to the text of David's Psalter by Jan Kochanowski, for four-part unaccompanied mixed choir. The music is fully subordinated to the contents and the expressive layer of the text; he illustrates the mood or particular words by means of musical devices. In some works the composer applies dance rhythms characteristic of canzonetta. The Melodies for the Polish Psalter are a valuable monument of Old Polish culture showing the lay achievements of the renaissance adapted to the Polish conditions.