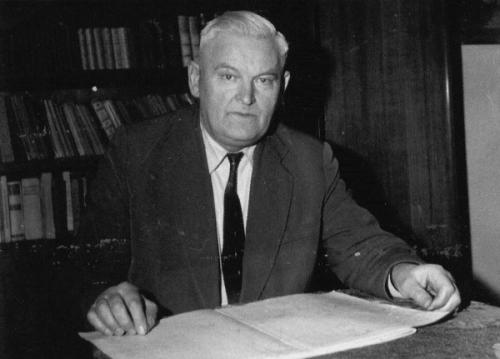 Born December 3, 1896 in Radoryż (near Łuków), died August 27, 1979 in Katowice, a Polish composer and organist. In the years 1908-13 he studied piano and organ with J. Łysakowski at the Organist School of the Warsaw Music Society. Between 1913-15 he studied at the conservatory in Warsaw under the direction of M. Surzyński (organ) and R. Statkowski (theory), then worked as an organ teacher and organist of the cathedral in Plock. He undertook further studies at the Conservatory in Warsaw, reading composition with R. Statkowski (1923-25) and with Karol Szymanowski (1927-29). In 1929 he began work at the conservatory in Katowice, where he taught counterpoint and organ, and from 1934 - harmony, counterpoint and organ at the music school in Cieszyn. During the German occupation he stayed mostly in Sadowne (north-east. Mazovia), where he was organist at the parish church, composed and taught music. From 1940 worked in the Home Army, under the pseudonym of Chmiel. In 1945 he was appointed Dean of the Education Faculty in the Academy of Music in Katowice. Between 1946-49 he founded and ran the private Karol Szymanowski ‘Musicalising’ School in Katowice. In 1956 he received the title of associate professor, full professor in 1958. In 1957 he became head of the Department of Composition in the Academy of Music in Katowice. Szabelski’s students include amongst others: Z. Bargielski, E. Bogusławski, R. Gabryś, H.M. Górecki, J.W. Hawel, Z. Szostak, P. Warzecha and the Slovak composer T. Salva. The students had great warmth and trust for him, describing him as a man radiating generosity and kindness. From 1957, Szabelski participated in the work the Board of the PCU (Polish Composers’ Union). His works were often performed at the International Festival of Contemporary Music "Warsaw Autumn", from 1956 (3rd Symphony and Concerto Grosso). Beyond Polish borders Szabelski’s Toccata was popularized by L. Stokowski (Chicago, 1958). This piece also enjoyed particular success in Poland, becoming a kind of showcase of the composer's music. Bogusław Szabelski did not undertake many musical journeys, and in 1965 he exceptionally attended the festival in Zagreb, in connection with the premiere of his Flute Concerto with the participation of S. Gazzelloni.

He received the following awards and honours: State Award II Degree for the 3rd Symphony (1953), PCU awards for achievements in the field of music and pedagogy (1961) and for lifetime achievement in composition (1967), Award of the Minister of Culture and the Arts II Degree for his Sonety, Improwizacje and Wiersze (1961), and I Degree (1976), Order of the Banner of Work 1st Class (1974), Commander's Cross of the Order of Polonia Restituta (1959) and the Commander's Cross with Star of the Order of Polonia Restituta (1977). Szabelski’s manuscripts are in the National Library, apart from the Sonety, lodged in the Library of the Academy of Music in Katowice and the Études and Sinfonietta in the WOSPRiT Library.