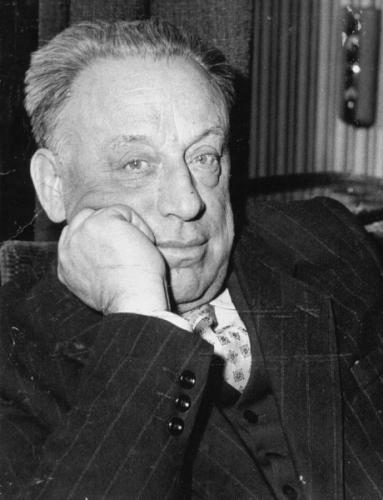 Born on September 13th, 1896 in Lviv, died January 10th, 1963 in Poznań, Polish composer and teacher from a family of Polish musicians. He studied piano with V. Kurz and theory with S. Niewiadomski at the Conservatory of the Galician Music Society in Lviv. From 1918-22 he studied law at the Jagiellonian University in Krakow, at the same time he learned harmony and counterpoint with B. Wallek-Walewski and piano with H. Peters and 1921-22, he studied musicology with Z. Jachimecki. In 1923 he moved to Vilnius, where until 1927 he worked as Legal Counsel with the Attorney General. In 1926 he was vice president of the Vilnius Philharmonic Society. In the years 1929-31, with a MWRiOP scholarship, he studied composition with N. Boulanger and instrumentation with P. Dukas in Paris; at that time he worked in the Association of Young Polish Musicians as secretary and vice president.

In 1931 he taught music theory and composition at the State Conservatory of Music in Poznań and led the S. Moniuszko choir. In 1931 he married in Vilnius with Stanisława Harasowska, musicologist, with whom he undertook a lot of work in the field of education and dissemination of music. In 1932 he returned to live in Vilnius, where he taught theory at the Conservatory of Music, and from 1935-39 he was deputy director of the private M. Karłowicz Conservatory. He also lectured at the University of Vilnius. In 1932 he founded the Pro Arte vocal group and initiated the creation of The Vilnius Council of Artists’ Associations. During the war he was organist at St. Casimir’s Church in Vilnius. In 1945 he became director of the Secondary Music School in Lublin and together with his wife organized a ‘musicalising’ school. Between 1947-50 he was director of the State Academy of Opera in Poznań and the director and artistic director of the Poznań Philharmonic. Between 1948-63 he taught composition at the Academy of Music in Poznań (from 1950 as a professor); in the years 1951-63 he was professor of composition at the Academy of Music in Warsaw (from 1957 as Head of the Department). Szeligowski’s pupils included: A. Bloch, H. Czyż, J. Fotek, A. Koszewski, W. Kotoński, Z. Krauze, B. Matuszczak, W. Rudziński, W. Słowiński. Between 1951-54, the composer served as president of the Polish Composers’ Union. In 1958 he was president of the Poznań branch of the Polish Composers’ Union, in 1960, Chairman of the Council of COPSA (Central Pedagogical Office for Arts Education), in 1960-62, research manager of musical activists for CPARA (Central Advisory for the Amateur Artistic Movement), in 1961-62 president of the H. Wieniawski Music Society in Poznań. In 1961 Szeligowski was one of the initiators of the Poznań Spring Music Festival. In 1965 he was buried in the Poznań Skalka crypt of Merit.