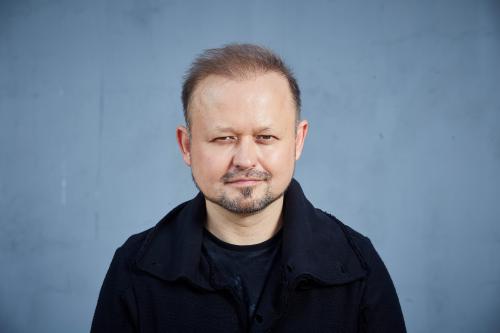 Maciej Zieliński was born in 1971. He graduated from the Academy of Music in Warsaw (composition class of prof. Marian Borkowski), he is also a graduate of the Royal Academy of Music in London. One of his first successes as a composer was the premiere of Miniatures for chamber orchestra as part of the 4th Encounters of Young Composers “Droga” in Gdańsk (1994). Later, Zieliński's works were performed at festivals such as: the "Warsaw Autumn" International Festival of Contemporary Music, the Warsaw Music Encounters, the Poznań Spring Festival, the Musica Polonica Nova, the ‘Gaude Mater’ Festival of Sacred Music in Czestochowa, the 14th Synthesizer-Musik-Festival in Braunschweig (Germany), Musica del Novocento in Rome (Italy), the Park Lane Festival in London (UK), the World Music Days (Romania), and Presteigne Festival (Wales).

In 1996, the composer received two serious orders. The organizers of the European Youth Music Festival commissioned him a piece for string orchestra (Shining), which was performed at the inaugural concert in Copenhagen. In the same year, commissioned by Copenhagen'96, he wrote Tractus for a mixed choir a cappella – the Polish part of the European Requiem.

In 1997 he started cooperation with PWM Edition, which is his publisher until today. So far, over 30 albums with his music have been published, including 4 monographic ones. The album with String Quartet No. 1 performed by the DAFO quartet, released by PWM / DUX, received the Fryderyk 2002 award. His album “5 Symphony" was nominated for the Fryderyk 2014 award in the "Album of the Year" category, and in 2012 he was nominated for the award Fryderyk in the" Composer of the Year" category. In 2019, the Zieliński’s monographic disc ARCHIPELAG was released by ANAKLASIS, a phonographic brand of PWM Edition, as one of the first albums in the catalogue.

The composer was the moderator of the 20th International Composers' Courses in Radziejowice (2000). He participates in the work of the National Jury of ISCM World Music Days'2002 in Hong Kong. He is a member of the Polish Society for Contemporary Music, the Polish Composers' Union, and the Society of Authors ZAiKS.


Maciej Zielinski is also a well-known film music composer. In 2019 he received “Best Score” award at the “New Filmmakers LA Awards” in Los Angeles and nomination to “Crystal Pine Award” at the International Sound and Film Music Festival in Croatia. In 2016, 2017 and 2020 he received nominations for the Polish Film Academy Awards - “Eagles” in the category “Best Music”.