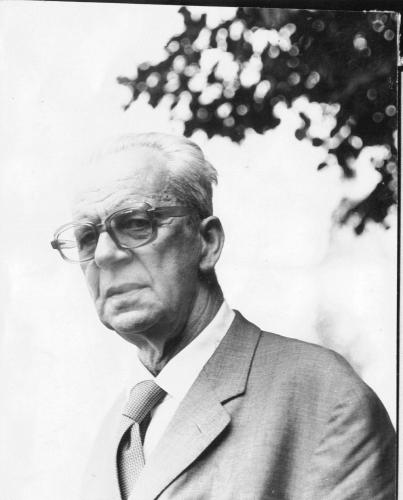 Zygmunt Mycielski, born August 17, 1907 in Przeworsk, died on 5 August 1987 in Warsaw. Polish composer, writer and music activist. He came the Małopolska branch of a Wielkopolska aristocratic family, known for patronage of the arts, the cultivation of science and arts, patriotic and social activities. He graduated from high school in Krakow, studied music there with Father B. Rizzi, an Italian composer, organist and choral conductor. From 1928 – following Karol Szymanowski's advice - he continued his musical education at the Ecole Normale de Musique in Paris with P. Dukas and N. Boulanger and formed a lasting friendship with the latter.

He was active in the Association of Young Polish Musicians in Paris, where he was president from 1934 to 1936. In 1936, he returned to Poland and took up composing, music criticism and journalism. He participated in World War II, in the September campaign and in 1940 in France; as a soldier in the Polish army he found himself in the Stalag, then was assigned to forced labour for a German farmer.

After the war, Mycielski returned to Poland. In the years 1946-1948 and 1957-1959 he co-edited “Ruch Muzyczny”, in the years 1960 to 1968 he was chief editor of that magazine. He co-edited «Res Facta» (from No 7, 1973), “Rocznik Chopinowski” (IX-XVIII in 1975, 1986) and “Chopin Studies” (I, 1985-IV, 1994). In 1947-48 and 1952-1954 he was vice-president, and during 1948-1950, president of the Board of the ZKP (Polish Composers’ Union, hereafter PCU), from 1985-87 a member of the presidium of the Board of PCU, in 1954-57 and 1960-1983 was part of the PCU Admissions Committee. In 1955, he published an article criticizing the isolation of Polish culture from the work of composers in the world in “Przegląd Kulturalny”. In September 1968, following the invasion of Czechoslovakia by Warsaw Pact soldiers, he published an Open Letter To Czech And Slovak Musicians in the Parisian “Kultura”, which resulted in restriction by the authorities in the PRL: he was removed from his function as editor of “Ruch Muzyczny”, his writings were subjected to censorship and he was banned from foreign travel; the composer was also subjected to similar restrictions later.

In December 1974, Mycielski signed a letter by 15 intellectuals and artists to the communist authorities demanding that Poles living in the USSR could have contact with Polish culture and their own education, in December 1975, he signed a memorandum with 59 intellectuals to the authorities in respect of the planned changes to the constitution. In 1978, he participated in the illegal founding of the Towarzystwo Kursów Naukowych (Society of Academic Courses), operating in student circles. Zygmunt Mycielski received the Knight's Cross (1953) and Commander of the Order of Polonia Restituta, the Banner of Labour (1955) and the Ordre de Mérite Culturel in Monaco. He has received numerous awards: 1952 - state award 3rd degree for his Polish Symphony, 1954 and 1987 – the PCU Award, 1955 - MKiS Award for Silesian Overture, 1961 - Special Prize at the Prince Rainier III de Monaco Concours Musical for the Second Symphony, 1981 the MKiS award 1st degree and in 1983, became an honorary member of PCU.

Zygmunt Mycielski was buried in the family crypt in Wiśniowa n. Wisłokiem, where in 1988 at A. Szypuła’s initiative, a Society was established in the name of the composer, through which, in 1990, the magazine “Kamerton” (bimonthly, quarterly since 1991) was founded, focusing on the documentation and promotion of Mycielski’s life and work. In 1990, a film was made, Zygmunt Mycielski. Szkic Do Portretu (scenario J. Stęszewski and I. Wollen, directed I. Wollen, Telewizja Polska, Kraków,). Mycielski requested his creative legacy be deposited with B. Zwolska-Stęszewska and J. Stęszewski in Warsaw. The archive includes sketches, manuscripts and published editions, musical and literary writings, copious correspondence, and unique diaries (a list of 28 notebooks containing entries is given in Niby Dziennik). The composer’s legacy can also be found in: Biblioteka Narodowa (National Library) in Warsaw, Archiwum Kompozytorów Polskich XX w. (Archive of Polish Composers of the 20th Century) at the Warsaw University Library, and the PWM Central Lending Library.