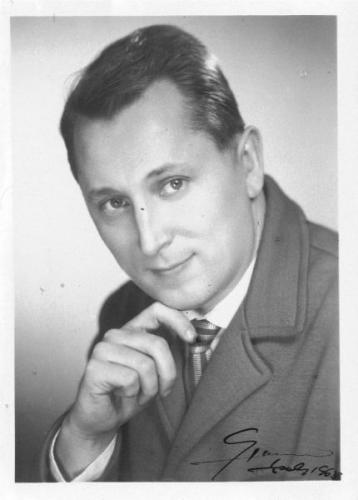 Andrzej Hundziak, born on 11 March 1927 in Krośniewice, Polish composer, pedagogue, animator of musical life. In the years 1948-1951 he studied musicology at the University of Łódź and in the years 1949-1953 in the PWSM gaining a Diploma in music theory. In 1960 he studied composition with T. Szeligowski the PWSM in Warsaw, and after the latter’s death he continued with B. Woytowicz at the PWSM in Katowice, resulting in 1966 with a Diploma with Distinction. In 1967 he moved to Paris, where he deepened his knowledge of composition with Nadia Boulanger. For many years he worked in music education, while also active as a choral conductor. From 1974 he worked as a senior lecturer at the Music Academy in Łódź. From 1979-1981 he was director of the Grand Theatre in Łódź. He participated in organizing many festivals, competitions and reviews of music, including the nationwide Festival of Contemporary Musical Creativity for Children and Youth "Do-Re-Mi". He was chairman of the commission for creative works for children and youth by the Main Board of the Polish Composers' Union and a member of the National Council for Culture. In 1977 he was awarded first prize at the Third Biennial of Art for Children in Poznań, in 1980, the Prime Minister's Award for his work for children, in 1982, second prize for „Wyliczanki” in the PCU competition. Hundziak makes use of the achievements of contemporary compositional techniques in his work for children and young people, often using miniature forms („Cyrk”, „Śpiewy i rytmy”, „Muzykujemy”, „Znajomi z telewizyjnego okienka” and others).
Copyright © 2013 PWM