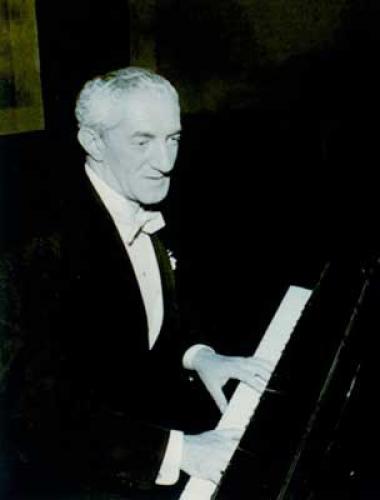 Henryk Wars (Warszawski) was born in Warsaw on 29 December 1902 and died in Los Angeles on 1 September 1977. In the United States he is known as Henry Vars. A composer, pianist, arranger and conductor. Between 1906 and 1916 he lived in France with his family. Upon his return to Poland in the early 1920s he began his studies at the Academy of Fine Arts in Warsaw. He came from a musically gifted family: his elder sister Józefina Warszawska (d. in Niece in 1976) was an opera singer (appearances in the Warsaw Opera and La Scala); his younger sister Paulina was a pianist (she died during the German occupation of Poland). With support from Emil Młynarski, Wars won a scholarship to the Warsaw Conservatory of Music from which he graduated in 1925. After his military service as an officer cadet in Włodzimierz (1925-27), Wars returned to his profession as a musician. He wrote light music as well as music for cabaret, based mainly on jazz: The New York Times Foxtrot (1928) is known as the first jazz composition in Poland. His career as a film music composer began with the film entitled To Siberia (premiered in 1930; directed by Henryk Szaro). The film was a success which produced further commissions for Wars to write incidental music for film, theatre and cabaret.


As musical director of the "Polish Parade" ensemble formed mainly from the Lvov "Tea-Jazz" band musicians belonging to the 2nd Corps, Wars composed numerous songs and musicals, some of which were unfortunately lost. The Ref-Ren's (Feliks Konarski's) album entitled "Songs from Helenka's Rucksack", which was published in 1946 in Rome, included some of Wars's compositions, such as "Helenka the Volunteer", "Maybe a Day..., Maybe a Year", "Along the Milky Way", "Poles, to Arms!" and "Five to Noon". Wars's combat trail led him from Teheran through Baghdad and Palestine to Italy where, after a cessation of hostilities, he was decorated with the medal Cavaliere della Croce by the last king of Italy, and the "Polish Parade" ensemble received a prize as the best Allied musical ensemble. A Long Way (1946) was the first post-war film with Wars's music, produced in Italy. In 1947 Wars emigrated to the USA and settled in Los Angeles. At first he worked as a copyist and arranger and, starting in 1951, he composed soundtracks over a period of twenty years. In the 1950s Wars often collaborated with other film music composers (Daniele Amfitheatrof, Mischa Bakaleinikoff, Paul Metz, Arthur Morton, Hans Salter, Clifford Vaughan) and that is why he was not always mentioned as a composer of a specific soundtrack. The film Chained for Life (premiered in 1951, directed by Harry L. Fraser) was the first American film with Wars's music. In the USA Wars collaborated with several film studios, such as Columbia, Universal, Twentieth-century Fox, MGM, United Artists and Paramount Pictures; he composed soundtracks for about 30 films and TV serials. The most popular are: The Big Heat (premiered 1953, directed by Fritz Lang), Ski Crazy! (premiered 1955, dir. by Gordon McLean), Seven Men from Now (premiered 1956, dir. by Budd Boetticher), China Doll (premiered 1958, dir. by Frank Borzage), The Little Shepherd of Kingdom Come (premiered 1961, dir. by Andrew V. McLaglen), Flipper [My Friend Dolphin] (premiered 1963, dir. by James B. Clark), Daktari (premiered 1966, dir. by Paul Landres and Otto Lang) and Fools' Parade (premiered 1971, dir. by Andrew V. McLaglen).

Wars was also a composer of symphonic music. Discovered in 2002, the manuscripts of his Symphony No. 1 (in four movements) for orchestra, an orchestral suite City Sketches, the Sonatina (in three movements) for orchestra (dedicated to Ravel), the Piano Concerto (in one movement), Maalot for Orchestra (orchestral overture), Adagio for Orchestra, Religioso for Orchestra as well as other minor compositions and numerous drafts dating mainly from 1947-51 were passed on to the collections of the Polish Music Centre attached to the University of Southern California by Elżbieta Wars, the composer's widow in 2005. The Symphony No. 1, together with the Piano Concerto, City Sketches and Maalot were performed during the Film Music Festival in Łódź in 2005. Wars's compositions are very melodious. His orchestral works (e.g. Symphony No. 1) were influenced by Szymanowski, Skriabin and Ravel with regard to their sophisticated scoring and individual harmonies.

In the early 1930s in Paris, Wars met Ravel and Gershwin; his orchestral triptych City Sketches (High-Rise; Downtown Blues; Freeway Scherzo) is stylistically related to An American in Paris as well as to some jazz elements in Ravel's late compositions. In his songs and light instrumental pieces, Wars was a kind of Polish Irving Berlin or Cole Porter. He collaborated with Julian Tuwim, E. Schlechter, F. Konarski, K. Tom and M. Hemar, among other lyricists. Wars's film music of 1930s is very much like American film music. In Hollywood Wars mainly composed soundtracks for western films. Bing Crosby, Doris Day, Margaret Whiting, Mel Torme as well as the Ice Capades and Ice Follies ensembles performed his songs dating from the 1950s and 1960s. The song "I Have a Date with Her at 9.00" appeared in the film The Pianist (premiered 2002, directed by Roman Polański).
Copyright © 2013 PWM