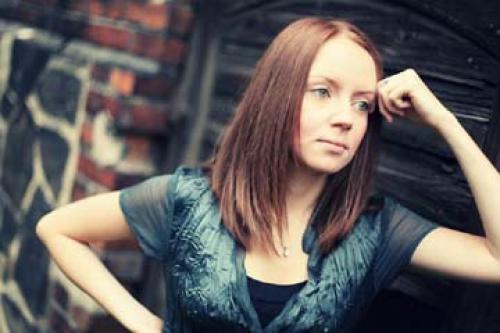 Composer, flautist, pianist and improviser. Born in 1985.
She has just completed her studies with the highest distinction in Professor Aleksander Lasoń’s class at the Karol Szymanowski Academy of Music in Katowice.

In 2009, IMAGE 1929 (Zdzisław Beksiński in memoriam) for symphony orchestra, has been nominated for the prestigious Polish Public Media OPUS Award 2009.

In 2008 she received first prize for IMAGE 1929 (Zdzisław Beksiński in memoriam) for symphony orchestra at the Artur Malawski Composition Competition in Rzeszów (this piece was commissioned by Marek Pijarowski and musicians from Philharmonic in Rzeszów).

In 2009, she received a distinction for her piece ...IN THEIR ETERNAL FACES... for flute solo, in the National Composition Competition for flute solo in Wrocław.

One of her newest compositions These phrases... These songs... These arias... for string orchestra was commissioned by Marek Moś and the AUKSO chamber orchestra. It was premiered on 29th March  2009 during this year’s 3rd Festival of Premiers in Katowice.

Also in 2009, her the newest composition ART-Tro-Ti-phonium for 6 harps, 3 trumpets and timpani was premiered on November 2009, in Salzburg (Mozarteum) – ordered by Mozarteum and Festival of Harps in Salzburg.

In 2006 she received a distinction for her piece Cierń for 2 voices, viola and piano to words by Tadeusz Różewicz in the National Composition Competition in Gliwice.

As an improviser she collaborates with instrumentalists, composers, improvisers and jazzmen such as Matthias Mainz (with group Realtime research from Germany) and Richard Ortmann. In 2006 she co-founded the electronic-improvisation music group AI Players.

Justyna Kowalska-Lasoń’s pieces have been performed for example during the II International Days of Young Composers and Performers - ‘New Music, New Faces’ in Kraków, at the Polish-Lithuanian open air fine arts-compositional meeting in Istebna, during compositional meeting in Rycerka Górna (Poland),“Summer Music Festival” in Rycerka Górna and “The Composition, Education, Interpretation and Jazz Department Days” at the Academy of Music in Katowice, during the ‘Dialogues’ International Festival in Minsk in Belorus and in International Festival of Young Composers in Kiev in 2009, during Festival of Premiers in Katowice, Festival of Harps in Salzburg in 2009, Festival of Polish Music in Kraków 2009 and others.
She collaborates with, amongst others, the Katowice Academy of Fine Arts investigating the possibilities of linking two different fields, music and art.
She herself also creates computer graphics.