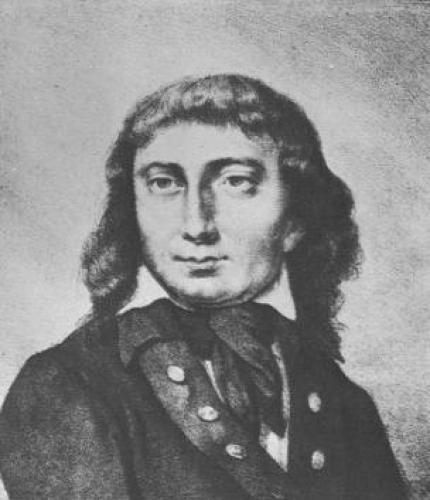 Maciej Kamieński (Kamięski, Kamenický, Kamenský), born October 13, 1734 in Slovakia, and died 25 January, 1821 in Warsaw, a Polish composer of Slovakian origin. A variant form of the name, Kamięski, figured on a manuscript of 1778, which was burned in 1944, and the forms and Kamenický and Kamenský are given in the "Ceskoslovensky Hudebni slovnik" (vol.1, pub. 1963). Place of birth unknown, given in Polish and foreign documents as Sopron (German Ödenburg), which Kamieński gave, as well as Magyar Ovar but this is not confirmed in in any parish or municipal registers. Kamieński spent his early years in Sopron in the house of Count Henckel von Donnersmarck, and after his death in 1760 moved to Vienna with his widow's entourage. Kamieński gained his musical education in Sopron and expanded it in Vienna; in October of 1762 heard young Mozart perform at Schönbrunn. K. settled in Warsaw not earlier than at the turn of 1762/1763, the first known date from this period is 1773, when J. Engel’s edition of "Mélanges de Muisque pour le clavecin" (lost during World War II) was published in Warsaw, including a few pieces by Kamieński. Kamieński quickly gained recognition in Warsaw as a teacher of piano and solo singing. In 1803 he became the owner of a property on Ulica Świętojerska, where he ran an inn and lived until his death. In 1805 he leased the so-called Dulfowski manor house on ul. Nalewki in which he organised musical evenings for the general public. In the years 1811-1812 was a member of Freemasonry guild "The Temple of Isis", after 1815 was "Director of Harmony of the Grand Orient of Poland”. Kamieński was married twice, with his first wife he had a son Karol, a talented painter, the second time he married the widow Anna Gelinek. He was buried in the Powązki graveyard.
Copyright © 2013 PWM