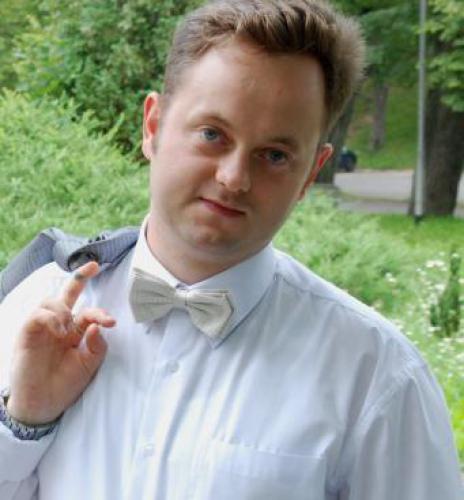 Igor Jankowski was born into a Polish family in Minsk in 1983. He studied accordion with Professor Mikołaj Bujanow at Liceum Muzyczne (kind of secondary school with music subjects). Later he studied composition with Dmitrij Smolski at the Belorussian State Academy of Music in Minsk, where he received bachelor’s degree. In 2009 he started to study for the second level (Master’s degree) at the Feliks Nowowiejski Academy of Music in Bydgoszcz. Marian Borkowski and Marek Jasiński, two excellent Polish composers, have played a very important role in moulding his creative capabilities.

Even during his studies at the Belorussian State Academy of Music he improved his compositions skills. He worked at the State Musical Theatre in Minsk and later at the Grand Opera and Ballet Theatre in Minsk, where he received numerous commissions for musical arrangements from various theatre ensembles.
In 2006, he won first prize at the national composition competition on 115. Birth anniversary of M. Bogdanovich. A year later, at the 9th International Siemieniako Composition, he received an honorary diploma for “creative explorations”.

In 2008 he was commissioned to write a musical illustration of “maslenitsa”, a traditional Belorussian folk ritual, for choir, soloists, orchestra and ballet group. “Maslenitsa” was premiered at the concert hall in Minsk in 2009 and I t was a big success.

In 2009 the Academic Choir of Television and Radio performed the cantata “Mysterium Fidei” at St. Mary’s Cathedral in Minsk as part of the Week of Prayer for Christian Unity. Successive performances took place during the International Art Festival “The Bells of Sofia” in Polotsk and at the concert on the occasion of the 15th Meeting of Belorussian Composers at the Grand Concert Hall in Minsk.