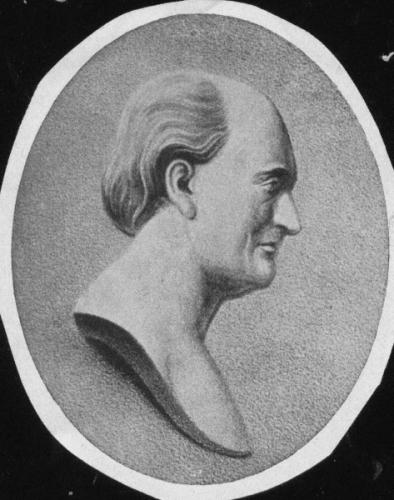 Franciszek Mirecki was baptized on 31st March 1791, in Krakow, and died the May 29th, 1862. Polish composer, conductor, pedagogue. Son of Franciszek Mirecki, the organist of the Church of the Blessed Virgin Mary in Krakow, and Teresa Gorączkiewicz, from a family of Krakow musicians. He started learning the piano with his father at the age of 4 years. In 1800 he made a public appearance in Krakow as a pianist. In 1806 he was descant in the choir of the Church of the Blessed Virgin Mary. From 1810-14 he studied in the Department of Philology of the Jagiellonian University and also taught French and Greek in the St. Anne’s Gymnasium. In 1814 he went to Vienna, where he was librarian and secretary to Count J.M. Ossoliński; he also worked with A. T. Chłędowski, providing him materials for the history of Polish literature. In Vienna, he studied composition and piano with J.N Hummel; for composition he also took advice from I. Moscheles, A. Salieri, J.P. Pixis. He went to many concerts, and got to know pieces by composers such as L. van Beethoven, C. Czerny, M. Clementi, and a number of Italian operas (D. Cimarosa, G. Paisiello, G. Rossini, G. Donizetti). In April of 1816 Franczisek Mirecki met Beethoven, then staying with Ossoliński, who had invited Mirecki in order to obtain from him original Polish folk songs to use as material for an arrangement of a set of 23 songs of various nations (WoO 158); the composer sent 2 songs (Oj, upiłem się w karczmie and Poszła baba po popiół) along with information about the manner of performance by Polish bands (letter Mirecki to A. Grabowski, 16th April 1816). In the summer of 1816 Franciszek Mirecki stayed with Ossoliński in various places including Lezajsk, Lviv and Przemysl. On November 28th, the same year he lost his job on account of the planned transfer of the Ossoliński library to Lviv. At the beginning of 1817 he moved to Venice, where he learned orchestration for 11 months, became familiar with Italian opera and gave piano lessons; at the end of this year he spent a short time in Milan. There he became friends with G. Ricordi, his later publisher.

At the turn of 1817/18 went to Paris, where, at the suggestion of G. Ricordi, the Parisian publisher A. Carli entrusted him with the arrangement of B. Marcello’s 50 psalms, vocal duets by F. Durante and madrigals by G. Clari. These arrangements gave Franczisek Mirecki European renown and material stability. However, this would not have been possible without the help of L. Cherubini, who patronised this work and guided Mirecki’s further compositional education. Little information is available regarding the composer's stay in Paris; from letters to A. Grabowski it seems that he had the intention of returning to his homeland. Encouraged by A. Czartoryski, he composed three operas in Paris: Cyganie (Gypsies), Pułaski (according to unconfirmed information, performed in Paris) and Piast, which was planned for performance in the Grand Theatre in Warsaw in 1822.

In November 1822, at Ricordi’s invitation, he returned to Milan, where he wrote, amongst others, 4 Italian ballets, of which Essex enjoyed the greatest success. Then he took the position of director of the theatre orchestra in Genoa, and wrote the opera Evandro in Pergamo (1824) for that stage; it enjoyed enormous success (26 performances), and the composer was invited to the theatres in Rome and Naples, where he presented a 2 ballets written for the stage in Milan. He also visited Florence (supported by M. Kl. Ogiński) and Turin. In the year 1825 he published a treatise on instrumentation with Ricordi, well received by the critics. This established Franczisek Mirecki’s reputation in Italy as an expert in orchestral craft, especially in the field of wind instruments. In July 1825 he signed a one-year contract as Director of the Italian Opera in Lisbon. I due forzati, Franciszek Mirecki’s best Italian opera apart from Evandro, was written there, and from there he sent correspondence to the newspapers „Rozmaitości Warszawski” and „Kurier Warszawski”. He was forced to move and this halted his work on the opera Adriano in Siria; going through Britain, France and Germany (in Dresden he met K. Lipińsski), he went to Genoa where in 1826 he became director of the theatre orchestra and was a teacher of singing. In April 1831 he met A. Mickiewicz who was passing Genoa; they created a project together to write an opera called Legionista, which was not realised. Overcome by a desire to return to his country, Franciszek Mirecki sent out offers to various Polish institutions and individuals; he only received a sketch for the libretto for an opera Rajmund mnich from A. Fredro in 1836; the proposed staging in Lviv did not take place. Probably in July of 1838 Mirecki made a proposal to the Senate of the Free City of Krakow to establish a school of dramatic singing; moving to Krakow he opened it on 22nd  December 1838 in his apartment, na Piasku No. 95, in the absence of subsidy or support from wealthier citizens. The high standard of the school is documented through the annual performances by the school students (the first on 8th December 1839) with a difficult, usually Italian operatic repertoire, solo and choir, and the funds gained by the composer from the Towarzystwa Przyjaciół Muzyki i Bursy Muzycznej (Society of the Friends of Music and Music at the Collegiate Bursa) of the St Anne’s University church helped transform the institution in 1841 into the School and Bursa of Music, and then link it as a department of the Krakow Technical Institute. Franciszek Mirecki led the department of church and dramatic singing in this school to the end of his life, contributing greatly to the development of musical culture of Krakow in the years 1840-60. He undertook constant attempts to create a Polish opera theatre in Krakow; he did this in 1844 under the direction of H. Meciszewski, after whose resignation in 1845 he continued as artistic director of the opera to its collapse after November 1846. In the years 1841-44 he wrote Cornelio Bentivoglio on an Italian libretto, staged in 1844 at La Scala with a little less success than previously, and Nocleg w Apeninach based on A. Fredro's comedy, performed successfully in 1845 by Franciszek Mirecki’s students in Krakow. In 1852 he sent 2 Masses and 4 Offertoria to a contest in London, which, however, was cancelled, in 1855, a Symphony in C minor to a competition in Mannheim, which was played. In 1848 Franciszek Mirecki was appointed a member of the Scientific Society in Krakow, and in 1858 an honorary member of the Galician Music Society in Lviv. Despite his composing success and a favourable evaluation of his teaching, Mirecki felt rather undervalued, especially in the Varsovian environment of composers, and his aesthetics shaped on the design of the Italian opera became outdated, as reflected, amongst others, by the sharp criticism included in the Krakow "Czas" by L. Chrzanowski, as well as in the general condemnation with which his Pogląd na muzykę (1860) published anonymously in Prague was met, containing a scathing attack on Polish folk music and its artistic arrangements.

Franciszek Mirecki was married to an Italian and had five children. From youth throughout his whole life he struggled with material difficulties. However, he had friends and knew many influential people who supported him with kindness.

Characteristics of his work

Franciszek Mirecki’s music represented the period of change from Classicism to Romanticism in Polish culture. Throughout his life, his only ideal was Italian music, including old Italian opera and Italian comic opera, especially Rossini and Donizetti. He completely rejected the music of Berlioz, Liszt and Verdi, and reluctantly accepted the work of Beethoven. He consistently opposed all manifestations of romanticism, believing it was an effect of deformed taste. In his pamphlet Pogląd na muzykę (Opinion on Music) he called romanticism “real Utopia” and nearly announced his downfall; he accused composers, from whose work he anonymously quoted musical examples, of ignorance and found mistakes in musical prosody (e.g. in Moniuszko's Halka and Hrabina), despite allowing himself false declamation in the opera Cyganie (this was already highlighted for him in 1822 by K. Kurpiński in the in-depth analysis included in the “Warszawianin”). He accused Chopin and Schumann, whose works (Barcarolle and Phantasiestücke) he anonymously quoted in Pogląd ... recognized by M. Bristiger, of ostinato bass, seventh chords with a sixth and figurative melody; to his criticism he added his own ‘fixes’. He interpreted Polish folk music and dances as a ‘levelled source’, unmelodic and monotonous, not useful as artistic inspiration, even though he himself wrote numerous dances. J. Sikorski polemicized with Mirecki’s theses in ‘Ruch Muzyczny’ (1861 No. 3-6).

Franciszek Mirecki had serious success as a creator of opera, but the evaluation of his work in this area is difficult due to a lack of complete scores. Printed extracts of overtures and various fragments witness clear understanding of the rules of the stage and a fanatical admiration for Rossini. There is a great deal of the composer's piano work in foreign collections; alongside F. Lessel, and J. Elsner he is the main representative of the Polish piano sonata before Chopin. Franciszek Mirecki’s sonatas are based on a classic pattern and show formal simplification (little expressive subjects, abbreviated development and recapitulation); characterized by simple harmony and modest keyboard technique. His dances are also in the classical conventions, apart from the Polonaises, carrying an accent of early romantic lyricism. Mirecki’s variations and rondo are richer in terms of compositional technique, showing the blending of classical style and brillant (e.g. Variations Op. 6 and Op. 18); the style brillant works most strongly in the Adagio et Allegro Op. 24 for piano sextet, both Piano Trios (Op. 11 and Op. 22), and in the bravura introductions to some of the Polonaises. A Beethovenian model combined with rich instrumentation is shown in the later Symphony in C minor. Mirecki achieved great artistic success in collaboration with L. Cherubini in arranging early music (B. Marcello, F. Durante, G. Clari), in which the piano part added by the composer witnesses a mastery of counterpoint. Franciszek Mirecki was an excellent teacher and a seasoned connoisseur of Italian singing. He organised his school of music on the model of Italian conservatories, undertaking a fixed curriculum and entering into a contract with students to requiring them to remain until graduation. He trained many good singers, including H. Hoffman-Majeranowska; shortly before his death he gave lessons to H. Modrzejewska. From about 1855 he also taught composition to E.W Śmietański, and in the years 1857-59 W. Żeleński. The composer’s works have been completely forgotten, and have also never been the subject of research. However, his operatic success in Italy, the recognition that his treatise on instrumentation enjoyed (one of the first in Europe, and the first in Italian), as well as many foreign editions of his works allow you to see in Franciszek Mirecki – next to F. Janiewicz, and before Chopin - the first Polish composer to gain recognition abroad.