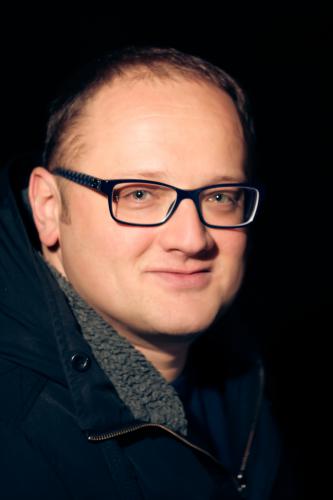 
Wojciech Kazimierz Kałamarz – composer and lecturer specializing in church music was born on 24th November 1974 in Dębica. He started his music education in the 1st level State Music School in Dębica and continued in the State Music High School in Rzeszów (the clarinet class of J. Cynarski).
From 1997 to 2003 Kałamarz studied choral conducting at The Academy of Music in Kraków under the direction of A. Korzeniowski and church music at the Faculty of Choral Conducting, Church Music and Music Education. He also studied composition under A. Zawadzka-Gołosz and M. Długosz. In 2009 the composer received a doctorate in history.

His compositions have been performed in Poland and abroad during numerous events and festivals, such as A. Didur's Opera Festival in Sanok, Ave Maria Festival in Czeladź, Days of Krzysztof Penderecki in the Teatr Wielki in Poznań, International Festival of Contemporary Music „Days of Krakow's Composers Music”, International Festival of Contemporary Music „Warsaw Autumn”, XI International Choral Competition of Sacred Music in Preveza (Greece), XVIII Sacred Music Festival in Rumia, Contemporary Organ Music Festival at the Eastman School of Music - University of Rochester (USA).
Wojciech Kałamarz was also honoured by Polish Composers' Union with the Hieronim Feicht Award for his musicology work (2010).

Since 2003 Wojciech Kałamarz is a lecturer of church music at The Vincentian Fathers Institute of Theology (ITKM). In October 2007 he was assigned to lecture history of music at The Pontifical University of John Paul II and since 2010 he works at The Interuniversitary Institute of Church Music in Krakow, teaching the analysis of sacred music works and history of music. Wojciech Kałamarz is also an assistant editor of „Pro Musica Sacra” and editor-in-chief of Jan Siedlecki's Church Songbook.