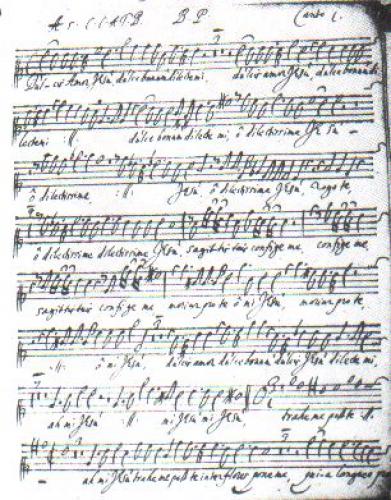 Polish composer and organist, probably of German origin (J. Mattheson, 1740). The extant archival documents, concerning only the years 1637-1664, do not make it possible to determine the date and place of Pękiel's birth. Using them as a basis, however, it is possible to indicate two periods and two centres evident during the composer's artistic career as well as an approximate date and possible place of death. Pękiel was first active at the royal court in Warsaw, where he certainly stayed between 1637-1654 and where he arrived during the reign of Władysław IV (that is 1632 at the earliest, but probably in 1633). Initially he fulfilled the role of organist in the royal chapel directed by Marco Scacchi (1628-1649), as attested by information dated 27 March 1637 in Liber baptisatorum of St. John's collegiate church in Warsaw, and then that of deputy kapellmeister (Pękiel was described as "Capellae Vicemagistro" in the document of 9 January 1641: Libera incisio in Sylvis Villae Brudno), as he wrote and performed religious music (H. Feicht, 1925) and educated young musicians. Adam Jarzębski, mentioning Pękiel as deputy kapellmeister in his Gift or a Short Description of Warsaw (Warsaw 1643), estimates him highly as an organist and composer. Probably in 1649, i.e. after Schacchi had left Poland, and, at least from the beginning of 1653, Pękiel became kapellmeister of the royal chapel (as documented by Liber donationum containing information about the composer's estate at Ujazdów) and certainly held the post until at least 1654 (according to the information of 30th June included in Liber baptisatorum of Warsaw's St. John's collegiate church), and most probably 1655, i.e. the dissolution of the chapel on account of the Swedish invasion of Poland and occupation of Warsaw. In 1653 King Jan Kazimierz appointed Pękiel, together with several other persons, to serve and protect the Queen, at the same time exempting him from the duty of taking part in the war expedition against the Cossacks and Tartars (according to a document of 28 August 1653 from Real-estate Register Files). After 1655 the composer spent about three years in exile with the court, perhaps as a person assigned - as in 1653 - to the Queen's court.

Between 1658-1664 Pękiel stayed in Cracow as kapellmeister of the cathedral chapel at Wawel, taking over the post after the death of Franciszek Lilius, as attested by a record of 1 October 1658 from Acta Actorum Capitularia of the Archives of the Cracow Cathedral Chapter at Wawel. While fulfilling this role and remaining in close contact with M. A. Miśkiewicz, the provost of the Rorantists' chapel, the composer retained the dignity of royal kapellmeister until the end of his life, although he had left Warsaw, selling his estate at Ujazdów, granted him by the king, to Krzysztof Pac on 21 October 1659 (according to records in the Files of the Public Crown Register and Acta castrensia palatinatus cracoviensis). A record of 23 August 1664 from the Wawel Acta Actorum Capitularia documents the fact of Pękiel's leaving Cracow (perhaps never to return) and joining the king (in Warsaw?); it is, however, only an entry dated 3 October 1674 in Acta Actorum Capitularia , which confirms that the post of the Wawel chapel kapellmeister was assumed by D. Fierszewicz, most probably Pękiel's successor.

Bartłomiej Pękiel is one of the most outstanding Polish composers of the 17th c. His extant output comprises mainly religious vocal and vocal-instrumental music as well as single instrumental works: three Canones a 6 , i.e.a triple canon as well as two two-part canons with four-part counterpoint as well as a single Fugue, discovered by Jerzy Gołos. The religious music manifests stylistic duality characteristic of the compositional practice of the 1st half of the 17th century. His vocal works (sometimes with a bass organ part provided) consisting of masses, motets and songs, belong to the prima prattica trend, while his vocal and vocal-instrumental compositions, made up of masses, the concerto Dulcis amor Jesu and the dialogo Audite mortales as well as, most probably, most of his compositions only known by title - were examples of to the seconda prattica. Each of the stylistic groups is characterised by separate and, at the same time, distinctive technical features.

Zofia Dobrzańska-Fabiańska: [entry] Pękiel Bartłomiej. An extract from the entry prepared for the PWMEncyclopaedia of Music, vol. 8.