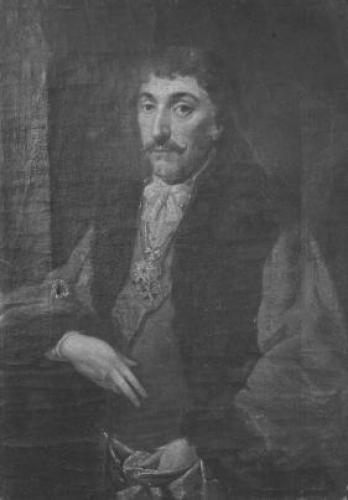 Maciej Radziwiłł, Prince, born circa 1750, Szydłowiec, died 1800 Niaśviž, from 1788 Lithuanian Castellan, Polish composer and librettist. Two librettos written in Niaśviž by Radziwiłł are known, from the heyday of court theatre after 1780, as a result of Prince Karol Radziwiłł (known as Panie Kochanku ‘Mr. Lover’), bringing actors and musicians (J.D. Holland, V. Nicollini), establishling a school of music and ballet, for which students were recruited from the local population, and the ballet company (led by Pettinati and Łojka). Radziwiłł wrote the libretto (manuscript preserved in the National Library) to the opera "Agatka,or The Arrival of the Lady", presented in 1784 during the visit of King Stanisław August Poniatowski (music by J.D. Holland or A. Danesi), and to his own three-act opera, "Wójt osady albiańskiej", which represents the trend of musical comedy on a peasant theme, presented in 1786 in the Radziwiłł’s summer residence in Alba, near Niaśviž.
The libretto for "Agatka" (the only remaining complete opera composed for the magnates’ stages) has an idyllic character: social issues of the day are dealt with against a background love story (the relationship between a good lord and his subjects). The text stands out among other librettos of the period, as it is in full verse, both in the sung parts (primarily octosyllable) and spoken (predominance of 13 syllable lines). The author effectively uses dramatic techniques (including conciseness of dialogues), mixing multi-threaded action with elements of comedy (Walenty’s ribald humor), and varied language (characters of the peasants mazurate, such as in Agatka’s sentimental-idyllic song "Biedne ptasęta, biedne pisklęta"). After moving to Vilnius (1788) Radziwiłł composed orchestral works, chamber music and piano pieces, including a 3-movement Divertimento in D major for an expanded instrumental ensemble (bassoons, horns), a 3-movement Serenade in B flat major in the early classical style, orchestral polonaises including "La chasse" (with clarinets and hunting horns) with a programmatic and illustrative character (a chase, barking dogs, shots).
Copyright © 2013 PWM