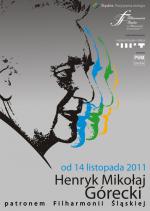 On 14 November, 2011 the Silesian Philharmonic in Katowice took the name of Henryk Mikołaj Górecki, the eminent composer, who was particularly associated with Katowice. His work promoting the city cannot be underestimated; he lived, created and collaborated with many musical institutions there for years. In 2008 he received the title of honorary citizen of Katowice as evidence of "the highest recognition for outstanding achievements in area of music learning and culture, promoting the city of Katowice at home and abroad."
In connection with the naming ceremony there will be concerts, during which all three philharmonic ensembles will perform: the Chamber Orchestra, Choir and Symphony Orchestra of the Silesian Philharmonic.

15 November
6pm Metropolitan Cathedral of Christ the King, Katowice
Holy Mass in the intention of the whole community of the Silesian Philharmonic on the occasion of giving it the name of Henryk Mikołaj Górecki, and also for the peace of the Soul of the Composer on the 1st anniversary of his death