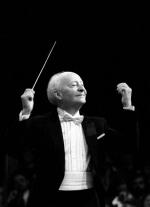 For music lovers, the National Philharmonic has prepared a total of thirty concerts including the most important works by the Master for the coming months. In order to familiarise the the audience with the person as well as the composer's opinions and fascinations, the  concerts include fragments of his texts, which have become concert mottos. They refer either directly to his works, or to the context in which they were placed.

The most important festival associated with the work of Witold Lutosławski will be Chain X whose inauguration will take place on the eve of the birth of the Master - January 24, 2013 at the Royal Castle. As the organisers, the Witold Lutosławski Association, say "the jubilee year will be different from previous editions through the richness of its repertoire and the number of participating ensembles. The benevolence of all the partners has helped bring the festival concerts to the most prestigious halls of Warsaw - the National Philharmonic, however, set a condition not easy to meet; to not repeat works by Witold Lutosławski which it had already been planned for 2013. "

In addition, the Witold Lutosławski Society has established a Medal of the Year, which will be given to people who have contributed to the performance, dissemination and research of Lutosławski's music. As part of the anniversary year it will also conduct the following activities:

„Genius Lutos” Project – realised jointly with the Szczecin Philharmonic and addressed to mentally handicapped people. A special role is played by the Gamelan Percussion Orchestra, which operates through the Szczecin branch of the Polish Association for the Mentally Handicapped, bringing together people with intellectual disabilities. Orchestra rehearsals and workshops in preparation for the new repertoire based on ideas inspired by Lutosławski and his work will lead to joint concerts with artists from the Szczecin Philharmonic. A lasting effect of the project will be a methodological guide with film documentation.
Lutosławski's Warsaw Walk - an electronic publication created in cooperation with the Fryderyk Chopin Institute in the form of a mobile phone application. Its content is a rich set of historical and contemporary images and text and audio information about the most important places in the capital city connected to the residence and work of Witold Lutosławski.
Competition composition - with an international range, without territorial restrictions or age limit. The subject of the contest is an original, never-before-awarded or publicly presented piece for symphony orchestra of the same instrumentation as Witold Lutosławski's last symphony. The compositions will be judged by a jury composed of Luca Francesconi, Kazimierz Kord, Magnus Lindberg, Steven Stucky, Paweł Szymański, Tadeusz Wielecki.