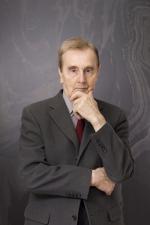 17 June will be the 85th birthday of Romuald Twardowski, composer, teacher and author of orchestral, choral and theatre music. His work, encompassing almost all genres, is a boundless source of varied repertoire: from religious music, through song cycles to great orchestra forms.


Romuald Twardowski was born on 17 June 1930 in Vilnius. The first reminiscences from this everchanging city of his youth have been a constant source of artistic inspiration for the composer. It is in this city where - already during the war - he started playing the violin that he had been given by the ex-musician of the St. Petersburg orchestra who soon became his first teacher. It is also there where he learnt the sounds of church music, listening to it with his ears wide open during Catholic and Orthodox Church liturgies. At the Theatre on Pohulanka Street he experienced his first emotions for the opera which would inspire his future operatic work. Vilnius was also the city where he discovered his passion for the organ. After the war he would establish a close link with that instrument by enriching the liturgies at the Church of St. John of God with his play. Having no experience in playing the organ, Twardowski quickly learnt the basics of playing the piano and after a few months sat at the church organ for the first time. In the successive years he used to work at the Missionaries’ Church and at St. John's church in which Stanisław Moniuszko had played a hundred years before.

In 1950 Twadowski was accepted at the conservatory and started a regular education in piano and composition classes. That marked the beginning of his strong interest in composition art. In 1956 he composed his first concerto for piano and orchestra. The single-movement form, with central episode of a reflexive character, announced the structure of his later compositions: Capriccio in blue for violin and orchestra (1979), Spanish Fantasia for violin and orchestra (or for cello and piano, 1985), Hassidic Melodies for violin and orchestra (1991), Piano Concerto (1984) and Cello Concerto (1995). By taking part in various competitions, the young composer started to present his works to a wider audience. After graduating from conservatory, he worked at the music school in Panevėžys for a while and in 1957, after having been granted the permit for going to Poland, he left Vilnius for Warsaw, to continue his composition studies with Prof. Bolesław Woytowicz at the State Higher Music School.

"New is not everything"

The 1960s were an extremely fruitful years in Twardowski's work. He gained high appreciation in various competitions: in 1961 he won the 1st prize at the Polish Young Composers competition for his Antifone per tre gruppi d’orchestra which was performed a year later at Warsaw Autumn, in 1963 he took the 2nd place at the UNESCO International Composers' Tribune in Paris, and in 1966 he won the 1st Prize of Prague Spring International Music Festival for his Sonetti di Petrarca per tenore solo e due cori a cappella (1965). His ballet: Wizard's Sculptures (1963) and opera: Lord Jim (1970-73) were awarded at the Prince Rainier International Competition for Composers in Monaco (in 1965 and 1973, respectively). Also at that time Twardowski would go to Paris (twice: in 1963 and 1966) to study Gregorian chant and medieval polyphony with Nadia Boulanger. That experience certainly added to his interest in vocal music, and especially to his fascination with religious music. During that period he developed his individual language of composing which combined the love of tradition and the will of using new composing techniques without violating the listeners' perceptual attention.


In the 1960s and '70s Twardowski revealed an increased interest in theatre music. At that time he wrote his ballets (Naked Prince, Wizard's Sculptures), a romantic opera Cyrano de Bergerac (1962) and morality play Tragedy or the Story of John and Herod (1965), as well as his musical dramas: The Fall of Father Suryn (1969), Lord Jim (with the libretto based on Joseph Conrad's novel, a monumental work with high emotional load) and Maria Stuart (1978). Twardowski's educational activity is also worth mentioning. In 1972 he began collaborating with the Fryderyk Chopin Academy of Music in Warsaw (now: University of Music).

At the turn of the 1980s the composer initiated an artistic exchange with Lithuania. During his numerous trips around Europe he constantly promoted Polish music. In his work he would more and more frequently turn to vocal composition. Apart from chamber and orchestra music (e.g. Three Frescoes for symphony orchestra - music impression on Orthodox Christianity, 1986; the popular Old Polish Concert for string orchestra, 1987; Italian Album for orchestra, 1989; Niggunim, Hassidic melodies for violin and symphony orchestra, 1991), he also wrote song cycles (e.g. Face of the Sea, 5 songs for bass-baritone and piano, 1979) and numerous choral works of great musical value. Involvement in the organisation of the International Orthodox Music Festival propelled Twardowski into composing even more choral works.

It seems that the choir, whether homogeneous or mixed one, is one of the most favourite line-ups for Twardowski. Excellent knowledge of choral polyphony, acquired both by personal experience and during extensive studies with Nadia Boulanger, allowed him to master the polyphonic structure of a vocal ensemble. However, Twardowski would not limit himself only to sacral music - apart from many religious compositions, he also wrote secular music for the choir, drawing from Polish folklore and Polish poetry. In that character he composed his early pieces: Bucolics for mixed choir (1962), Ode to Youth for reciting voice, mixed choir and orchestra (1969), Two Playful Songs (1972, in two versions: for mixed choir or for female or boys choir), Sea Impressions for mixed choir (1975) and two compositions for mixed choir from 1980: Village Concert and Three Songs from Kurpie. Small Concert for vocal orchestra (1988) is an extremely charming composition for mixed choir, in which Twardowski plays with various sound articulation techniques in singing.

Yet, what the performers and listeners value the most are Twardowski's religious works, e.g. Alleluja for mixed choir (1990) which - like Hosanna I (1992) and Hosanna II (1997) - can be performed by either Catholic or Orthodox church choirs. His Marian works: cheerful Regina Coeli for mixed choir (1996), Ave Maris Stella (in two versions: for male choir and organ, 1982, and for male choir, 2002) and Missa "Regina Caeli" (2002) are no less important. His Chwalitie Imia Gospodina (Praise the Name of the Lord, in two versions: for mixed choir, 1990, and for male choir, 2002) and Our Father for mixed choir (2005), revealing his high respect for Orthodox Church liturgy, are worth mentioning, too. There are also works for boys choir, like Two Carols composed in 2000. In the last decade Twardowski wrote other compositions for mixed choir: Pater noster and Our Father (2005), Myscerium crucis (2006), Popule meus (2006), as well as Virginum Custos (2011).