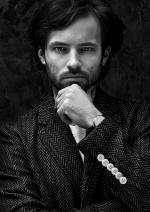 In a week, 19.01.2016 we will witness the premiere of Agata Zubel’s new composition, Chapter 13. Łukasz Borowicz is going to be the first to conduct the piece.

How did it happen that you had been chosen as conductor of the first performance of Chapter 13, the latest piece of Agata Zubel?

The invitation is a result of my permanent collaboration with Cami Music Agency and long-term activity of the Adam Mickiewicz Institute, which is aimed at promoting Polish repertoire, composers and performers.

How well do you know Agata Zubel's music? Is any of her pieces your favourite one?

I have observed and admired the artistic output of Agata Zubel for many years. I still remember my fascination with her 2nd Symphony, can recall many of her performances in her own pieces, and those where we performed together.

What do you consider most interesting in Chapter 13's score?

Following the literary text and illustrative sound, which is fresh and very convincing for me, and which refers in a subtle way to the colour of the music of the 20th century French classics.

Chapter 13 uses fragments of the text of The Little Prince by Antoine de Saint-Exupéry. Does that affect the structure and the musical content of the piece?

Of course, because each piece written under the influence of a great text bears its characteristics. Subtle irony, ephemeral poetic quality and multiplicity of meanings in the words of the Little Prince - I find that all manifested in intricate rhythmic structures which are never blunt, but always remain in the service of expression. The music of Agata Zubel is extremely variable. It very quickly moves from the mood of a comical dialogue to metaphorical conclusions. That all adds to the value of this work.

Do the preparations for the first performance in Los Angeles differ from your standard work on a new score? Chapter 13 was written for a chamber ensemble. What consequences does it have for the conductor?

Precision, precision and, again, precision. These are the consequences that each conductor should (happily) evoke, execute and bear while working on musical pieces, both composed for chamber ensembles and for greater symphony orchestras. Chapter 13 would probably take some beating in terms of complexity. Therefore, with respect, but also with great pleasure, we are taking the challenge of performing it for the first time.