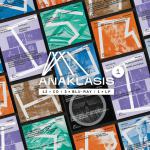 As the director - editor-in-chief of PWM Edition, Daniel Cichy PhD, stated a year ago during the label’s launch at Mała Warszawa, ‘ANAKLASIS documents what is happening in Polish music now, what happened during the twentieth century, what interests or irritates us, and also what fascinates us’.

This is all organised into six series. The recordings of Polish music of the twentieth and twenty-first centuries – both archive and specially produced recordings – display a uniform graphic design. The name ANAKLASIS comes from the title of what is perhaps the most famous avant-garde composition by Krzysztof Penderecki, from 1977. The word itself is Greek for ‘refraction of light’, and that is reflected in the minimalist graphic design by the Full Metal Jacket studio, dominated by irregular, refracted geometrical figures.

In defiance of the pandemic, which unfortunately occurred during the young brand’s first year on the market, we have succeeded in releasing new albums in each of the six series of ANAKLASIS.

The monographic blue series PORTRAITS, devoted to contemporary composers, includes a disc of works by Romuald Twardowski, the composer who has worked with PWM for the longest time, celebrating his ninetieth birthday this year (ANA 010), as well as discs of music by Maciej Zieliński (ANA 004) and Roman Palester (ANA 003). The green series SOUNDS, celebrating outstanding interpreters and their instruments, opened with Piotr Orzechowski, aka ‘Pianohooligan’, performing compositions by Zygmunt Krauze, Sławomir Kupczak, Marcin Stańczyk and Aleksander Nowak on a Rhodes electric piano (ANA 001). That was the first disc on the ANAKLASIS label. The second was devoted to Zygmunt Krauze, with a concept album on which he juxtaposed his own compositions with works by Fryderyk Chopin and John Cage, performing himself at the piano (ANA 002).

The orange series REVISIONS represents the crossing of borders and playing with conventions. To date it boasts experiments by the quartet of Kuba Stankiewicz, who is fascinated by Roman Statkowski’s opera Maria, in which he seeks sources of Polish jazz (ANA 008). Agata Zubel, Andrzej Bauer and Cezary Duchnowski, meanwhile, broke down the boundaries of genres and turned to songs by Stanisław Moniuszko on the album E-ŚPIEWNIK (ANA 009). Also drawing on the Romantic legacy was the High Definition Quartet, which – in keeping with Piotr Orzechowski’s pseudonym ‘Pianohooligan’ – offered a rakish treatment of the second part of Adam Mickiewicz’s Forefathers’ Eve, replacing the guests from the otherworld with iconic composers of experimental music (ANA 007). Appearing in this series less than two weeks ago was Krzysztof Herdzin’s album IMPRESSIONS ON PADEREWSKI, with jazz reinterpretations of the great pianist’s works (ANA 011). And 11 December sees the premiere of BAJGELMAN. GET TO TANGO, with compositions by one of the most famous Jewish composers from between the two world wars, performed by the well-known Cracow-based Bester Quartet.

The crème de la crème of ANAKLASIS is the purple series IMAGES. This features audio-visual recordings of shows and concerts in the ultimate Blu-ray standard, complemented with documentary films devoted to composers. Here we have Agata Zubel’s Bildbeschreibung (ANA 002 AV), Andrzej Krzanowski’s Audycja V (ANA 003 AV) and Aleksander Nowak’s much publicised and enthusiastically received opera ahat-īli – sister of gods, with a libretto by the Nobel prize-winning author Olga Tokarczuk.

Polish music of the twentieth and twenty-first centuries means not just composers and living, active performers of that music. There are also rich phonographic collections from the Polish Radio archive in the series HERITAGE. ANAKLASIS has turned to these collections twice, both times specifically to Stanisław Moniuszko, whose two-hundredth birthday was recently celebrated by the whole of Poland. SONGS / ARIAS / OVERTURES is a selection of excerpts from Moniuszko operas in performances that might be called canonic and exemplary, featuring Andrzej Hiolski, Bernard Ładysz, Halina Słonicka, Grzegorz Fitelberg, Jan Krenz and Jerzy Semkow (ANA 006). Also belonging among those performances is The Raftsman, with Słonicka and Ładysz, as well as Bogdan Paprocki and Andrzej Hiolski (ANA 005).

The latest series is OPERA, which features the first work by Aleksander Nowak and Szczepan Twardoch, Drach. Dramma per musica. Its premiere at the AUKSODRONE festival in Tychy was hailed as the ‘Event of the Year’ and won a Coryphaeus of Polish Music statuette this year. The CDs are complemented by vinyl releases. ANAKLASIS has already announced another release of an opera by the same duo – Syrena. Melodrama aeterna, recorded at this year’s AUKSODRONE. And that’s just the start!

All the ANAKLASIS releases are available at leading bookshops and music stores, on digital platforms and on the virtual shelves of the empik chain.