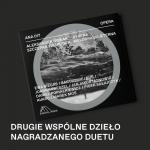 Drach. Dramma per musica – Aleksander Nowak and Szczepan Twardoch’s debut at the festival in Tychy – met with a particularly enthusiastic critical acclaim. The project garnered numerous excellent reviews, won the O!Lśnienia 2021 online poll (in the category of ‘Classical music and jazz’), whereas the world premiere of Drach received the Coryphaeus of Polish Music Award as ‘Event of the Year’. The CD and LP releases from ANAKLASIS, a record label of PWM Edition, made the work and its authors even more recognisable, while the inaugural album in the OPERA series, featuring this music drama, was nominated for one of the Polish music industry’s most important prizes – the Fryderyk Award.

The release of Drach will be followed already on 5th November by Siren. Melodrama aeterna, with Szczepan Twardoch’s original libretto and music by Aleksander Nowak, featuring in the solo parts singers Ewa Biegas, Joanna Freszel, and Jan Jakub Monowid, who have collaborated with this composer also on earlier projects. The soloists-instrumentalists – virtuoso sax player Bartłomiej Duś, Daniel Popiałkiewicz on the electric guitar, and pianist Piotr Sałajczyk, perform here with AUKSO Chamber Orchestra of the City of Tychy under Maestro Marek Moś.

‘It was clear from the start it would be something new this time, not based on an existing book. Quite soon, we started considering the subject of the sea.’ This is how Aleksander Nowak recalls the beginnings of their joint work on Siren. “It is, after Drach, our next chamber music drama, without (the need for) stage action and sets, but with its internal dramaturgy.’

What is Siren like according to those who have heard it? ‘The music of Siren is ethereal and light like mist, flowing like water, and, most of all, lyrical and song-like in concept,’ wrote Magdalena Stochniol in ‘Ruch Muzyczny ‘after the premiere. Jan Topolski commented in ‘Dwutygodnik’: ‘There is little silence and keeping silent […] in Nowak, but much singing: frequently in extreme registers and with great agitation. The opening episodes are made up of two extensive dialogues. Puer (counter-tenor, Jan Jakub Monowid) tells us about his struggle with adversities, starting on a shy and simple note, which collides with the Siren’s (mezzo-soprano, Ewa Biegas) low-register response, leading to a culmination with elemental wildness. The sea roars, howls, bellows, and hisses in a cluster-based staccato.’ If you are still not convinced, follow Dorota Szwarcman’s brief recommendation: ‘One simply needs to hear this.’