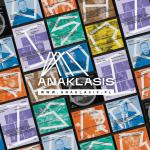 Though still young, after two years of activity the label already boasts an impressively large catalogue of as many as twenty-four albums. ANAKLASIS declares, however, that this has only been the beginning of its exploration of the most interesting phenomena in Polish contemporary music! Outstanding works, excellent composers and performers, a wide range of genres… The publisher offers all this to its listeners, collected and classified into six dynamically developing series.

ANAKLASIS, PWM Edition’s record label, enthusiastically received by both the industry and music lovers, has added eight new titles to its catalogue in the last year, including two vinyl records. It has already won Poland’s most important record award, the Fryderyk 2021, as well as several prestigious nominations.

The orange REVISIONS series, grouping together experimental projects which overcome boundaries and explore the borderlands between musical worlds, definitely takes pride of place among the new titles. It is as part of this series that Bester Quartet has presented a revival of music by Łódź-based composer Dawid Bajgelman in original arrangements by the band’s leader Jarosław Bester, conjuring up the spirit of Jewish music tradition. The CD BAJGELMAN. GET TO TANGO (ANA 013) offers a genuine panorama of Bajgelman’s output, made up of Polish- and Yiddish-language hits from between the World Wars and the profoundly sad ghetto tangos enriched by the vocals of leading Polish jazz singers: Grażyna Auguścik, Dorota Miśkiewicz, and Jorgos Skolias.

This, however, is not the only new release in the orange series! High Definition Quartet has inaugurated the vinyl line within REVISIONS, recording old Slav rituals of conjuring the dead on a gramophone record, for the joy of music lovers. FOREFATHERS’ EVE (ANA 007 LP) is concelebrated by an ensemble led by Piotr ‘Pianohooligan’ Orzechowski and the giants of ambient and electronic music: William Basinski, Krzysztof Knittel, Robert Rich, Christian Fennesz, and Igor Boxx of Skalpel duo.

Those who have never tasted analogue sound shall never reach heaven, as some would say. This, then, is not the only vinyl release in the REVISIONS series in 2021! GREAT ENCOUNTERS, bearing the symbolic catalogue number of ANA 075 (to mark the 75 years of PWM Edition) is a jewel in the REVISIONS crown, a journey through the musical past into music’s future. This record is unique in many ways. Both its CD and LP versions feature, instead of the series’ usual orange, PWM’s trademark yellow. The project, co-created by contemporary masters of Polish jazz and popular music, consists of pieces by Adam Bałdych, Krzysztof Herdzin, Adam Pierończyk, and Adam Sztaba, who have taken up the music of Polish classical giants, coming up with frequently daring interpretations of works by Fryderyk Chopin, Henryk Wieniawski, Stanisław Moniuszko, Karol Szymanowski, and Ignacy Jan Paderewski. The programme has so far had two stage performances: an online streamed broadcast on 6th June and a live ‘Great Encounters’ concert at ICE Kraków Congress Centre.

‘This project is PWM Edition’s showpiece for today, presenting us as a publishing house which works with the past, but also creatively maps out new routes into the future,’ said Daniel Cichy, PhD, PWM Edition’s director and editor-in-chief.

The green colour of the SOUNDS series has been taken up, in the second year of the ANAKLASIS label, by women-composers: Elżbieta Sikora, Hanna Kulenty, Grażyna Bacewicz, and Agata Zubel, whose compositions are performed on POLISH HEROINES OF MUSIC (ANA 014) by Orchestre Pasdeloup under the baton of Marzena Diakun. ‘Orchestre Pasdeloup and its head, Marianne Rivière’s openness to a project presenting little-known pieces by Polish composers and to contemporary music is very important to me, and I am happy to be part of this undertaking,’ emphasised the conductress. ‘It is an incredible meeting of Poland and France, and of artists from both these countries.’ As we learn from this album, ‘women’s voice in Polish music is as separate as it is distinctive,’ and it would be hard not to agree, especially when we add to this strong female representation in the SOUNDS series the lucid sounds of Monika Kaźmierczak’s bells on CONTEMPORARY CARILLON (ANA 016), comprising works by Zygmunt Krauze, Paweł Mykietyn, Aleksander Nowak, Agata Zubel, and Elżbieta Sikora.

The blue PORTRAITS series this time features Marcin Stańczyk, who enchants our audience with his musical philosophy encapsulated on the 2CD album ACOUSMATIC MUSIC (ANA 015). Questioning the rigidness of sensual perception, Stańczyk looks at the listening process from a new perspective through the lens of acousmatic compositions which in a sense force the listener to focus on pure sound from the borderland between dream and waking state.

The new and unique OPERA series, initiated and now continued by the extraordinary tandem of composer Alek Nowak and writer Szczepan Twardoch, perfectly rounds off the label’s second year. Their DRACH. DRAMMA PER MUSICA won the audience’s hearts and numerous awards. Only a few days ago, ANAKLASIS released the second part of the trilogy announced by Nowak: SYRENA. MELODRAMA AETERNA, this time setting Twardoch’s original libretto. The cast features the greatest personalities of the Polish music scene, singers Ewa Biegas, Joanna Freszel, and Jan Jakub Monowid, who already worked with this composer before, accompanies by other stars, such as the virtuoso sax player Bartłomiej Duś, Daniel Popiałkiewicz on electric guitar, Piotr Sałajczyk at the piano, and AUKSO – Chamber Orchestra of the City of Tychy under Maestro Marek Moś.


ANAKLASIS undertakes to maintain this commendable intensity of publishing work, and the above survey of this year’s new releases foreshadows many eminently worthwhile artistic projects in the future.


All of the ANAKLASIS titles can be purchased from the best bookstores and music shops, online services, as well as the virtual shop of the empik chain. Highly recommended!